The ladies won the final against the boats of the Weimar University (2nd place) as well as the TU Hamburg-Harburg (3rd place) and TU Dresden (4th place). TU Dresden won the second place just following the Dutch team among the men. The Weimar University gained the fourth place after an additional boat from Twente. The Georg Simon Ohm University of Applied Sciences of Nuremberg won the construction competition. Aachen University of Applied Sciences was able to secure the design prize – for the fourth time in succession.

The contestants of the regatta came from universities of applied sciences, universities and other institutions teaching on concrete technology. Prior to the tournament, together with their teachers the teams had to solve a tricky task to build a canoe of concrete that is both robust and impermeable to water and may furthermore withstand the tough conditions of a race. On Saturday just about 1,000 visitors admired the 64 boats of concrete on the regatta race course. In the category „open class“ the most bizarre boats of the parade were awarded. The boat called „Kohlebeisser“ of the Lausitz University of Applied Sciences – a paddle wheel excavator made of concrete – placed first. The boat having a length of 13 meters and a dead weight of more than 4 tonnes is designed like a framework construction consisting of 135 concrete struts and 42 concrete knots. Even the screws, nuts and ball bearings are made of concrete. The team of the Beuth University of Applied Sciences of Berlin won the second place presenting an oversized, floating television tower. The German cement and concrete industry organizes the German Concrete Canoe Regatta on a regular basis. The previous race took place in Essen on lake Baldeneysee in 2009. 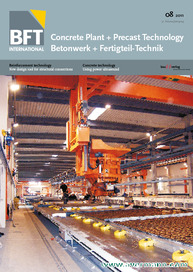