Continuity and innovation are the two basic principles that characterize the tradition of Karl Bachl GmbH & Co. KG, in the Lower Bavarian city of Röhrnbach. The family enterprise, founded in 1926 as brickyard, soon took up the production of concrete and reinforced-concrete products in the late 1950 s. Over the years, the product range has been extended and new fields of business have been developed. Today, Bachl is a group of companies active in many areas – ranging from the manufacture of precast parts, insulation and plastics production to construction services. The company employs a workforce of 1,800 throughout Europe.

At Bachl, the construction sector continues to play a major role. In this sector, precast production is an important mainstay of company activities. At the beginning of the 2016 season, after having been in business for more than 60 years, the company further strengthened its precast production. At the Hengersberg location in Lower Bavaria, a newly installed carrousel plant for double-wall production and the completely modernized reinforcement production were put into operation.

“Planning the plant was a complex task indeed,” said Werner Hörtreiter, Plant Manager of the Hengersberg precast location. Due to limited shop floor space, the carrousel system had to be as compact as possible. In the end, the concept developed by the Progress Group was found to be the most convincing solution.” Obtaining both the carrousel system and the machines for reinforcement production from a single source was the decisive factor for collaborating with the Progress Group. Both the new construction and the conversion were implemented by the sister companies Ebawe Anlagentechnik and Progress Maschinen & Automation.

“With the decision for the newbuild, the company’s product portfolio was to be effectively supplemented by double-wall production,” explained Norbert Peter, Head of the Group Business Unit Precast Plants at Bachl. Peter is convinced that the extension of the product range by the double wall was the right step: “No wall system is so much in tune with the times – it is future-proof, efficient, and energy-saving as well.” He emphasized the last point in particular. “We deliver our double walls, also known as thermo-walls, with integrated thermal insulation.” These walls exceed the strictest requirements of energy savings for an external wall and ensure high thermal protection throughout a building.

The insulation material required for the thermo-wall is manufactured in-house by Bachl itself and is cut to size by a fully automated insulation material cutter integrated into the newly installed carrousel plant. The cutter processes the insulation panels by means of a water-jet cutting system and forms them into the shapes needed in accordance with the CAD data transmitted to the cutter. The panels are then removed and placed on the pallets.

At the end of the production process, the pallet is scanned, and the shutters are unlocked, removed, and transferred to the cleaning system. Return to storage completes the cycle. The shuttering and deshuttering process is not only precise, but also ensures close adherence to the production schedule.

“The Form Master is without question one of the highlights of the entire plant,” says Plant Manager Werner Hörtreiter. “The special shuttering system is part of it. For us, it is a quantum leap.” The Infinity Line – as it is called by the Progress Group, which developed and obtained a patent for it – provides additional efficiency in the shuttering process. A systematically implemented combination of the shutters lengths allows all centimeter lengths to be achieved. This concept enables continuous shuttering without polystyrene elements and reduces the number of shutters required to a minimum. This not only simplifies the shuttering process and makes it more cost-efficient, but also improves the quality of the precast element: production without polystyrene elements enables manufacture of perfect external edges.

The shutters themselves can be converted for the production of solid walls by fitting them with a purpose-designed mounting system. This enables the attachment of adaptors, in just a few simple steps, for mounting the wooden form attachments. Conversion of double-wall to solid-wall production can in this way be easily and quickly accomplished.

An efficient concept was also developed for reinforcement production. Two systems that partly supplement each other manufacture bars and process lattice girders. A type ESR16 straightening machine was directly integrated into the pallet circuit itself. From coil, the ESR 16 straightens and cuts reinforcing bars of up to 16 mm diameter. It features Progress Rotor straightening technology and the flying shear. Both technical solutions contribute to rapid production speed and high quality of the final products. The finished bars are placed in readiness via a run-off, removed from there, and placed on the pallet.

In the adjacent production hall, in which the precast lattice girder floors are manufactured, the existing reinforcement production dating from 1993 was replaced by a fully automated Wire Center. This system straightens, cuts, and positions both concrete reinforcing steel from coil, as well as lattice girders. A type MSR integrated straightening, cutting, and bending machine manufactures the longitudinal and transverse wires just in time and provides them via a run-off. From there, they are transported by a robot to the pallet for the floor plate circuit and are fully automatically placed. The production of bent-up bars is also possible on this plant.

Lowering the production costs with a fully automated concrete spreader

The longitudinally moving turning equipment was fitted with special-purpose hold-down clamps that need not be removed and can be easily extended. For production of the insulated double walls, plug-on adapters are used.

The entire carrousel plant is controlled by ebos, a software developed by the Progress Group. This overall solution, which goes beyond the concept of an ordinary master computer, supports all aspects of the production flow – beginning with work scheduling, including production itself, and ending with process analysis.

The special analysis functions of ebos greatly contribute to planning capability and production transparency . By means of a PTS test (Production Test Service), for example, CAD data can be already reviewed prior to production with regard to production feasibility. The tool can also be used for production optimization.

Owing to the high degree of automation, only eight workers are required for every workshift. Bachl not only delivers the double walls it manufactures to other building contractors, but markets them itself in various divisions of its Group.

“System building is no longer imaginable without the double wall,” says Norbert Peter, Head of the Group’s Concrete Plants Division. In addition to lattice girder floors and precast stairs, the Group now – since commencement of production in March of 2016 – has a product in its portfolio that is used in residential, industrial, and infrastructure construction on the markets of Bavaria and Austria.

www.ebawe.de
This article appeared in 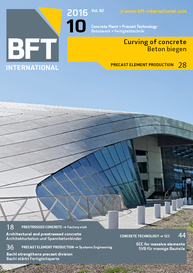 Geared up for the future with new pallet carrousel technology

The company has created a solid base for the future with its recent decision to invest in state-of-the-art technology and build a new plant for the production of double walls, solid walls and precast...

The subject of industrialization in the field of residential construction has been gaining considerable significance in the Peoples Republic of China during the last few years. In the country with a...

Founded in 1999, Kolbudy based inBet can look back on two decades of successful precast history in Poland, and even beyond. While the company in the first years worked on standard stationary...

Near Gdansk, Ebawe Anlagentechnik and Progress Maschinen & Automation, both subsidiaries of the Progress Group, have recently installed one of the most advanced precast concrete plants throughout...