The multi-story building complex in Berlin consists of 430 dwelling units. The eight-story-high slab blocks built in the 1970s are broken up through projections and recesses as wells as access towers. In the course of time, the so-called West slab blocks, similar to their East German counterparts, provided with sandwich elements, had been damaged by growth, solar radiation, frost and rain. The connection joints of the original plastic windows were moreover no longer tight. These defects had gone unnoticed for a long time, until massive water damage became visible on the interior of the dwelling units.

Based on a cost-benefit analysis, the owner decided to restore the connection joints on the faVades and windows and to repair the faVades. The housing complex is now state of the art, both in terms of its technical condition and its outward appearance; all of which was achieved at relatively little cost.

A company first removed growth and deteriorated plaster, brushed and blasted the remaining plaster areas and provided the faVade panels with an elastic and crack-bridging coating. The workers cut off the residual brittle sealing materials and installed in their stead the illbruck illmod 600 sealing tapes. The tapes are precompressed and resistant to driving rain (up to 1050 Pa), while at the same permeable to vapor diffusion. In this manner the joints are durably sealed, while the condensation water that is formed in the building can quickly escape to the outside. Owing to its long-time durability, the illbruck illmod 600 remains elastic, preventing in this way torn-out flanks and the ingress of water. A total of 16,500 m illbruck illmod 600 were installed on the faVades. The workers of the refurbishment company FRB, first filled the interior of the joints with mineral insulation material and subsequently sealed them with the premium joint sealing tape. FRB sealed the existing plastic windows from the outside with the illbruck window roller ledge. The ledge also meets all requirements, being resistant to driving rain, while being permeable to diffusion. At the site, the special comfort of the roller ledge became evident: The rollers are stored in boxes, taking up virtually no space, and are cut to the required length only at the time of installation. They were then bent along two pre-punched grooves that limit the space for the sealing tape. Subsequently, the ledge was applied to the window frame, using the Festix OT 14 illbruck system glue, and subsequently precisely aligned. A plasticized PVC lip protects the transition from ledge to jamb, equalizing at the same time minor roughness. Using the illbruck window roller ledge it was possible to refurbish the old windows without having to remove them and without creating dirt within a short time and brought them to the state of the art. 2,500 m of the illbruck window roller ledge were installed. The new window ledges were sealed with illbruck illmod 600.

For the Institute for Building Physics, Building Materials and Construction and the Institute for Construction Management and Construction Process Engineering the housing development served as research project. The scientists compared the aspects of building physics and economy of joint sealing tapes in various dimension and PU sealing materials. The different sealing materials were installed in the cleaned out joints in order to provide equal test conditions. Probes recorded the progress of moisture development. Conclusion: The technically correct execution being equal, considerable advantages result from the use of using compression tapes for refurbishing concrete joints with regard to wages compared to refurbishment with sealing materials. These savings more than equal the higher materials costs of the tapes. The much longer warranty makes the compression tables also more durable, since there are virtually no follow-up costs. In long-term tests into the building physics, dew condensation was found to collect in the construction joints. Behind diffusion-permeable compression tapes, dew condensation occurs much less frequently than in places where the joints were closed with sealing materials; the dew condensation can more easily dry out and thus presents a diminished damage potential in terms of construction materials corrosion and mold growth.” 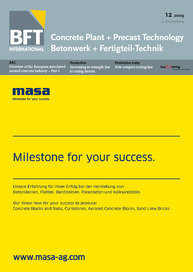 Method and apparatus for forming a formwork for a concrete slab

Only construction products with the corresponding national technical approval are allowed to be used for the refurbishment and new construction of facilities for storing and filling of liquid manure,...