The success story of the integrated sealing began in the 1980s and has even more solid reasons. Because using these modern sealing systems the following weaknesses, among others, could be excluded:

» a mix up of the sealing

» wrong position of the sealing after the pipe insertion, uncertain cross section

» damaging of the unprotected sealing at the spigot end

» depositions of soil and water, ice formation in the socket

» coming-off of the connector ring at the construction site

» extensive handling when gluing the sealing on the spigot end. 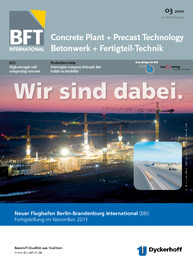 It is only 43 m long but unique all over the world: the new storm sewer at Hofmühlenstraße in the town of Stephanskirchen close to Rosenheim (Germany). The inspectable double sealings between the...

HawkeyePedershaab will be presenting several new product developments for the concrete pipe and manhole industries at bauma 2010. These new developments include the Kastmaster machine which features...

Traffic on the BAB A30 autobahn running from east to west near the German city of Bad Oeyhnhausen increases continuously. A four-lane national highway running directly through the spa absorbs the...