The Concrete Show 2012 in São Paulo/Brazil was a complete success for the concrete and precast concrete industry. The fair halls were packed with booths of the exhibitors from the whole world: reports spoke of more than 550 participants. The organizer, UBM, reported a record-breaking number of visitors: according to initial extrapolations, some 10,000 visitors came into the halls of the “Centro de Exposições Imigrantes”. These were for the most part trade visitors. Brazil is booming!

When asking the exhibitors more closely, one can, however, hear doubts about further developments. One reason: The downward correction in forecasts for the year 2012. Growth is expected to be less by nearly one half than expected and is estimated to range around 3%. Other reasons for the skepticism of some, especially the players on the global market: the customs duties on imported machines and components suppliers make products less competitive. Collaboration with Brazilian companies, and in-country production, moreover, are not always solutions. Productivity and quality are often critical factors, as well as rising wages. Is Brazil really booming then?

Looking strictly at the bottom-line figures, 2012 shows a tidy growth rate as well. The two large-scale projects “FIFA World Cup 2014” and “Olympia 2016” will provide further new impetus, especially for the construction sector. Many international companies have presumably thrown their doubts overboard and have established subsidiaries and signed collaboration agreements in Brazil in the recent past. If this development will be sustainable, it will no doubt also be good for the country. 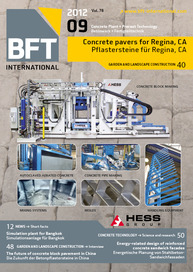 The Concrete Show 2014 took place in Brazil just a few weeks after the final whistle ended the FIFA World Cup, and nearly two years before the Olympic Games. The Concrete Show, on the basis of the...

In late August, the largest trade fair for concrete and concrete technology in Latin America opened for the fifth time in Brazil. Already on the first day of the event, the organizers reported record...

The more than 2,500 international exhibitors from the wire, cable and tube industries can look back on five successful trade fair days at the trade fair venue Düsseldorf with two leading fairs Wire...