The construction company Otto Quast digitizes its production systems step-by-step at its Freudenberg location in Germany. As part of the modernization and digitization strategy spanning several years, Unitechnik modernized the 25-year-old pallet circulation system for production of Filigran slabs. The next extension stage, in which a UniCam master computer will be coupled to the CAD and ERP system, also offers many technical options: automatic pallet charging, acknowledgment to ERP and transparent processes are the aimed-for results of the modernization.

The company Otto Quast, with headquarters in Siegen in the German state of North-Rhine/Westphalia, develops, builds and rehabilitates buildings, roads and bridges of all performance levels up to turnkey construction. As a one-stop contractor, the medium-sized company delivers high-quality work in concrete and masonry and for underground and road construction. For 75 years, day-to-day business includes execution as general contractor of in-house developed production and administration facilities for industrial and commercial construction. Two precasting plants located in the neighboring Freudenberg and in Coswig (Saxony) in Germany are also part of the corporate group. In addition to classic structural construction elements such as columns, prestressed roof trusses and stairs, Otto Quast also manufactures Filigran slabs and wall elements. But the entire product spectrum comprises much more: including underground containers, bridge elements and even foundations for electrical chargers. Here, the Freudenberg location acts as engineering partner for its customers. Twenty designers and construction project planners in the offices there work out needs-based solutions together with their customers.

The production facilities are adapted to the company’s wide-ranging offering and have steadily grown in the course of years. Among the central areas that supply the entire plant are reinforcement production, joinery and the mixing plant. Product-specific production areas are set up around these areas. The large structural elements are manufactured in a stationary production system.  There, for example, columns of up to 30 m length with base, prestressed beams and Pi basins with spans of up to 37 m and individual stairs can be manufactured. Two circulation systems are used for production of flat elements. On the newer of the two systems, solid elements and sandwich elements are manufactured. A production system, 25 years old by now, manufactures Filigran slabs on a pallet circulation system.

The current retrofit measure for slab production is embedded in a higher-ranking strategy. “With the aid of modern technology we want to ensure production in our plant, improve the quality and increase productivity, and in this way safeguard our company’s competitiveness over the long term,” explains Andreas Schimanski, Managing Director of the precasting plant.

The first measure consisted of modernization of the mixing plant by replacing the mixer and by adding another silo. In the next step, engineering was converted to 3D-CAD construction. The Strakon BIM CAD software from Dicad is used, and in the floor slab department the Baubit program. Betsy is used in production planning. Now that the company’s planning is state-of-the art, attention focusses on the production systems.

The system’s control engineering had not changed much since erection. Until recently, a Simatic S5 control from Siemens and the fieldbus from Phoenix with decentralized periphery had been in use. The drawings of the elements and the pallet charging are printed out and travel along with the pallet. The data for laser projection are deposited in a transfer register on a virtual server. The arrangement of the elements on the pallet currently still takes place manually. Allocation of pallet numbers and elements is recorded manually on a list.

As basis for further measures, control engineering had to be upgraded to the state of the art. Modern IT systems can no longer be coupled with outdated technology. But that was not the only reason for upgrading. “It is becoming increasingly more difficult to find experts who are familiar with the product family that the manufacturer, Siemens, has planned to discontinue for many years. Quite apart from the fact that spare parts supply is getting increasingly scarcer,” reports Andreas Schimanski. “That has a significant effect on the availability of the systems.”

In the first step, a modern Simatic S7 replaced the previous control unit. The Profibus system from Siemens replaced the fieldbus system. The switch cabinets and the local  control stations in the plant could be largely retained. Only the control units and the decentralized periphery were replaced. Thanks to the good preparatory work, the Unitechnik team needed to shut down the system for only one week for converting it and for putting it into operation. The change most visible from the outside is a large touchscreen that now hangs on the wall of the curing chamber. Over the monitor, the operators can access the layout of the plant and curing chamber occupation. Removal orders can be initiated and rebookings made. In line with the philosophy of digital change, the data come to the staff exactly where needed. No one has to go to the control station to get information.

The next step is already planned. At the beginning of next year, floor slab production will be coupled with the CAD and the ERP system. UniCAM.10 from Unitechnik will be used. As a result, automatic pallet charging, feedback of production data into the ERP and high transparency in production will stand to profit at Otto Quast. But, most of all, the master computer will have many more digital possibilities. In future, large screens will replace paper drawings and display the production parameters visible to everyone in the hall.

Another aspect is very important to Andreas Schimanski: “Without our staff, the digital journey will go nowhere. We have a fantastic team and a very experienced staff. They themselves must be convinced of the new technology. That works best, when we include them in the process.”

That is also one of the reasons why Otto Quast decided to implement his digital agenda in several steps. “We have well-functioning processes. There is no reason for acting rashly,” adds Schimanski.

Otto Quast systematically promotes a modernization program for its precasting plant. Retrofit of Filigran floor slab production takes place in two steps. Following replacement of control engineering, the UniCAM.10 master computer is on the agenda. This will enable further digitization of production – toward paperless production. “In Unitechnik we have found a very good partner for implementing our digital agenda,” Andreas Schimanski sums up.

In addition to the measures already taken, there is another project for increasing productivity in the future: such as, partial automation of reinforcement production, and modernization of another carousel system.

Accordingly, a range of modernization measures will take place at Otto Quast in the coming years, which will make Otto Quast a dominant player in the market. 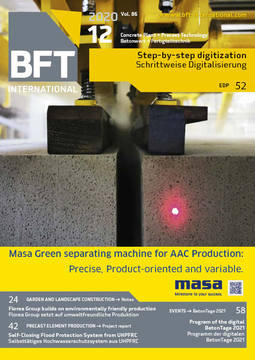 Kemmler Baustoff GmbH, manufacturer of structural and precast elements, upgrades its control system and technology at the Tübingen location. In this regard, the medium-sized enterprise relies on the...

Banning paper from production to the greatest extent possible had been the objective of the company BE Beton-Elemente in Steisslingen in Germany. As a result, 15 large-format TV screens and six...

At its Gerasdorf location near Vienna in Austria, Mischek Systembau GmbH is now using laser projectors from Unitechnik for the production of solid walls. With its investment, this manufacturer of...

Installation for producing a concrete slab fitted with cladding elements

Among the team at the OTTO QUAST Fertigbau Lindenberg precast plant the chemistry is obviously right. During the tour through administration and production, the employees greeted co-owner, Sebastian...