Steag Power Minerals has won the GreenTec Award for the innovative Photoment concrete additive for the decomposition of nitrogen oxides. Recently, general manager, Andreas ­Hugot, has received Europe’s greatest independent environmental and business award, according to the information given by the organizers, in Berlin.

On the occasion of a pre-award ceremony, Photoment was awarded the coveted prize in the Urbanization category of this year’s GreenTec Awards. Berlin Partner für Wirtschaft und Technologie GmbH, comprising the Senate of Berlin as well as more than 270 companies and scientific institutions, took over the sponsorship for this category.

After welcoming words of management representatives of Berlin Partner, the initiators of the GreenTec Awards, Marco Voigt and Seven Krüger, handed over the prize. “We are very proud of being awarded with this renowned prize,” Andreas Hugot stated. “Our staff members have developed a very strong product with Photoment, being able to make an important contribution to improving the city air.”

Paving blocks with Photo­ment, for example, have already been used in the InnovationCity Bottrop. There, they provide for better air in a downtown area with heavy traffic. Another advantage is the fact that the blocks do not turn green as much as conventional paving blocks. For both, the paving blocks merely need sunlight or artificial light and some rainfall, rinsing away the contaminations. “We are very pleased that our work is appreciated in such a positive way and we hope that there will be many people in future, using photocatalytic active products when it comes to paving areas,” says Hugot.

A simple example shows the effect of the innovative paving blocks: Under ideal conditions, the garage driveway of about 30 m² is already able to compensate the nitrogen oxide emission caused by a driving distance of 30 km per day (Euro 5/6 standard gasoline vehicle). Nevertheless, the fact remains: The larger the photocatalytic active area in a city, the larger amounts of toxic nitrogen oxides can be decomposed. 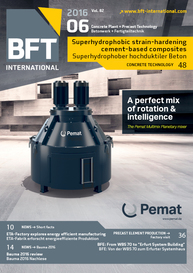 As  2011 selected place, the area of the field test used for the Airclean paving blocks shows a way for the purification of air and thus an improvement of our future quality of life. The area was...

Photoment is a concrete admixture with photocatalytic activity. It consists of a combination of flyash particles and different titanium dioxides (TiO2). On a photocatalytic surface, under the action...

On the site of the former freight train station in Bad Cannstatt, Germany, a new 25-hectare residential and industrial estate, NeckarPark, is currently under construction. The site was acquired in...

It couldnt really get any better: potential demand for the product being offered certainly exists, political framework conditions are right, and the public will not need much convincing of the...