The design, manufacture and erection of precast concrete solutions are Vigobloco’s area of activity. The broad range of products of the family enterprise, which employs a workforce of more than 100, includes columns, reinforced and prestressed beams, lightweight boards, hollowcore concrete floor slabs and double-T beams, box culverts, façade panels, fence walls and retaining walls as well as special components. “Our products are customized, and not standard solutions. We implement what our customers want,” explains Business Manager Filipe Saraiva.

Vigobloco profits from the positive development of the construction sector in Portugal. The Portuguese construction industry, only a few years ago left behind in the wake of the economic crisis, has recovered and the demand for precast components is on the rise. Since public contracts are nevertheless few and far in between, the company currently concentrates primarily on the private sector: i.e., on the manufacture and erection of industrial, logistics and commercial buildings, which make up around 85 % of its turnover. Vigobloco focuses on its growth, with a sustainable approach. It therefore invests primarily in technical and manpower resources, aimed at enhancing the quality of its products and at increasing its production capacity. “We continuously seek to improve,” says Saraiva.

From Portugal into the international market

Vigobloco was founded in 1977 by the current Chairman of the Executive Board Manuel Saraiva and began its activities in the production of concrete products and lightweight boards. Ten years later, the company moved to its current production facility in Ourém. The company premises have a total area of 80,000 m², with the plant occupying 30,000 m². In 1992, the manufacturer broadened its activities by adding the production of heavy precast elements, more specifically by construction of structural components for industrial buildings and storage halls. Around 15 years ago, Vigobloco added track elements, such as railroad sleepers, channels, trench components and pier beams to its product line, and since 1998 also beams, hollowcore floor slabs, blocks and vaults. In 1999 Vigobloco’s quality management was certified (in accordance with ISO 9001). In 2004, Vigobloco extended its portfolio by the manufacture of construction elements for bridges.

In 2007, Vigobloco launched the process of internationalization by founding a company in Mozambique. In 2008, a new company with a factory for production of precast elements for the SCUT S. Miguel Açores motorway was established on the island of São Miguel in the Azores. In 2011, Vigobloco formed a partnership for the Missão Vivenda project in Venezuela and erected there two new factories for the construction of 12,500 social housing dwellings, with completion of 27 dwellings per day. In 2015. Vigobloco set up a new company in France, VGB France, for the same purpose. That company employs a workforce of 40.

To increase concrete production capacity and as a backup in case of failure of another plant, as well as for improving working conditions and for optimizing production processes, a new concrete production plant with a capacity of 1 m³/cycle was installed. In addition, the company invested in loading and lifting systems. The mixing plant, a Liebherr Betomix, and the loading and lifting system from Mbm were put into operation in January of 2019. Installation took place during normal operating hours and, accordingly, did not require changes to the plant layout. Detailed planning of the various stages and measures was required to ensure uninterrupted day-to-day operation in the plant.

Girders up to spans of 43 m

To ensure its success, Vigobloco leaves nothing to chance. Before going into production, the manufacturer’s technical team tests and validates the specific requirements and particularities that have to be met for every single customer project. This results in preparation of detailed construction drawings that every worker can easily understand. All elements are designed in accordance with current standards and, on their basis, the precast elements for the specific production are planned. The choice of high-quality raw materials and certified materials is an absolute must for company success, owing to their crucial significance for the quality of the end product. Vigobloco obtains its cement, for example, from Secil. Production scheduling varies and depends on the complexity of the precast elements to be manufactured. Vigobloco has a production capacity of 250 m³ per day in the various units of the Urqueira facilities. The company utilizes about 90 % of the plant’s capacity. The shortage of qualified workers on the job market currently still stands in the way of 100 % capacity utilization. Vigobloco manufactures 80 % of its formwork itself and procures the remaining 20 % from outside. The various production units of the plant also include three units fitted with production lines for prestressed girders with spans of up to 43 m and prestressing capacity of up to 1,200 tons. 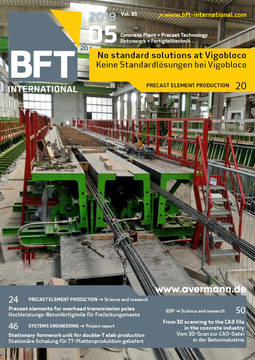 Precast parts of not ordinary dimensions

On the site of the former Hertie House in Essen-Steele, Germany, the erection of a three-story commercial building is currently underway. Thanks to the use of reinforced semi-precast parts, the...

Taunus Tower  with precast concrete components quickly all the way up

The joint-venture partners of Tishman Speyer and Commerz Real AG will complete the TaunusTower by the end of 2013. The office building, located at the corner of Neue Mainzer Strasse and Taunustor...

Company Idat GmbH will present its innovative CAD solutions for precast concrete components at booth B1.124. Based on the industrial standard AutoCAD, program modules are available for planning and...