Not only the exterior of the light cube made of architectural concrete of the Sanaa building of Zeche Zollverein (Coal Mining Industrial Complex) in Essen signalized the material on which the Dyckerhoff Architect Night 2016 was focusing: modern concrete in all its variations – presented in a competent and impressing way by means of outstanding examples of contemporary premium architecture.

Burkhard Fröhlich, editor-in-chief of the DBZ, Gütersloh, and Martin Möllmann, Director Marketing at Dyckerhoff GmbH, Wiesbaden, could welcome around 120 participants. That the event organized together by Dyckerhoff and Bauverlag was all about the building material concrete was already reflected by the venue; because the Sanaa building, which was constructed on the ground of the World Heritage Site in 2006, has become an icon of modern concrete architecture in the meantime. For this project, the Japanese architect duo, Kazuyo Sejima and Ryue Nishizawa, won the Pritzker Prize, which is the highest honor in architecture in the world.

The first project example, presented by architect Tobias Scheel of the Berlin-based architectural office GSW-Architekten, was the new Documentation Center for the History of National Socialism at Königsplatz in Munich. The building, an accurate cube made of white concrete, has an edge length of 22.5 m. The smooth white concrete façade was produced with ­Dyckerhoff Weiss.

Afterwards, Dipl.-Ing. Stefan Heeß of Dyckerhoff GmbH located in Wiesbaden demonstrated that every design idea, no matter how brilliant, always has to be based on perfect product quality in combination with equally perfect workmanship. In order to achieve the architectural concrete class SB4, among others, concrete was not placed during frost periods; moreover, concrete placement took place early in the morning when temperatures were very high. The 416 slabs for the interior and exterior shell were manufactured at the precast concrete factory and were installed into the formwork on the construction site.

The Wehrhahn line in Düsseldorf

Stefan Passarge of the construction company Max Bögl, Munich, and architect Thilo Höhne of Netzwerkarchitekten, Darmstadt, presented the second spectacular project, the Wehrhahn line in Düsseldorf, a 3.4 km long rapid transit line with six underground stations. In this case it was only possible to use self-compacting concrete (SCC) in the form of Dyckerhoff Liquidur, because formwork and building components for the construction of the tunnel ceiling did not leave space for vibrators.

The wall cladding of the six subway stations was designed as a curtain wall with air space, consisting of about 4,000 m² of light cast stone slabs in total which are made of white cement (Dyckerhoff Flowstone) – mostly one of a kind in different shapes and sizes without right angles. Interesting details concerning the production of the same were given by Harry Schwab, owner of Schwab-Stein GmbH located in Horb and manufacturer of the overall 6,700 slabs being 30 mm thick each.

Interesting details about the current status of the largest infrastructure project in Europe at present were presented in Essen by Dipl.-Ing. Michael Rathgeb of Ingenhoven Architects, Düsseldorf. The new underground station consists of a hall that is approx. 420 m long and 80 m wide. The roof structure is designed as a shell structure supported by columns in the shape of chalices. Their dense reinforcement not only required a special formwork, but also compaction was extremely difficult. The first sample chalice made of white concrete has already been cast and tested.

At the end of the event, Dipl.-Ing. Andreas Blobner of Dyckerhoff GmbH, Wiesbaden, presented “concretes for highest demands on technology and aesthetics”. These include Dyckerhoff Fluidur, a concrete that is easy to compact and used for slender components, and Dycker­hoff Rewadur, a water-permeable concrete for permeable road surfaces.

With the product range comprising Ferrodur, Dyckerhoff also provides a steel fiber-reinforced concrete which perfectly suits challenging tasks in the field of flooring. Dyckerhoff Ferrodur particularly ensures cost savings concerning material, transportation and storing thanks to the fast workability, the easy compaction as well as the fast bearing capacity. Last but not least, Andreas Blobner presented Terraplan, a ground concrete flooring system that looks like terrazzo. 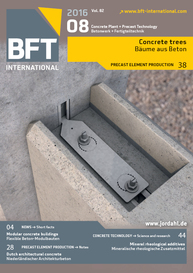 Events for the precast concrete industry

Bauverlag, the publisher of your technical magazine BFT International, has long ceased to be a publisher only in the classical sense. Bauverlag is a media enterprise and offers print media, digital...

Concrete as construction material has found its way into architecture, where it has been implemented with great intensity and creativity since the development of modern building with concrete  for...