Echo Prestress hollow-core concrete slabs, in combination with structural steel frames and raft foundations, were used for the fast-track construction of a new office development at Clearwater Estate in Boksburg, South Africa.

Built in two phases, the first phase comprising a gross lettable area (GLA) of ± 3,100 m² and the second phase 3,700 m² GLA, the project was the initiative of local property developer, Krisp Properties.

“We already had a lease agreement with Michelin Tyre Company South Africa for Phase 1 well before the first sod had been turned, which meant we only had seven months to erect the building,” said Jordan Mann, executive director of Krisp Properties.

Francois Marais of Francois Marais Architects said the construction of the buildings embraced new energy efficiency legislation rather than being restricted by it. “The design uses overhangs above all the windows and doors to minimize the impact of the sun and to reduce the escape of heat from the buildings,” says Marais.

Completed by the end of November 2013, Phase 1 comprises two double-story buildings, each measuring 1,550 m² (GLA), which are linked by a central entrance atrium.

“We deployed hollow-core slabs for the first floors as well as the roofs, and this assisted us in reducing construction time by several weeks. Hollow-core slabs were used for the roofing that would allow the necessary support for the installation of photovoltaic power generation units in future. Moreover, the roofs have created ideal catchment areas for harvesting rainwater to be stored in subterranean tanks,” said Mann.

Echo’s prestressed hollow-core slabs were specified by PDS Civil and Structural Engineers and slabs totaling +/- 3,100 m² were used for Phase 1. Phase 2 will make use of +/- 3,750 m² of Echo slabs. Slabs up to 10 m were deployed on the first-floor sections and slabs of between 5 and 7 m were installed on the roof. Both the first floor and roof panels were topped with steel-reinforced screeds and a bitumen coating was used to waterproof the roofs. In addition, Echo also supplied 9 m H‑shaped universal steel columns to provide slab support for the internal cantilevering.

According to structural engineer, Spiros Sdralis, of PDS, Echo’s role involved considerably more than  simply supplying the slabs. “We provided Echo with a set of drawings and they then prepared a layout that took all the servicing requirements into account. Echo’s engineer, Daniel Petrof, was involved from the outset and he was always on site when we needed him, particularly in solving specific on-site challenges,” said Sdralis.

“For example, some of the slabs had to be modified so that the upper section of the steel skeleton could be anchored to the first floor on a solid platform. This meant that the hollow-core end sections of some slabs had to be packed with concrete to provide the solid base. Echo filled in the voids with concrete according to our specifications and this enabled us to drill out the holes for the bolt anchor sleeves in the same way we had done on the ground floor.”

“The builders were able to begin the assembly of the upper-level steel frame as soon as the slabs had been installed and this was the prime advantage of using hollow-core slabs. If in-situ flooring had been used it would have delayed the completion dates of both buildings by several weeks.”

“Extensive use was made of cantilevering on this development, both internally and for the shade overhangs, and Daniel assisted with redesigning some of the cantilever sections on Phase 2. He also helped us with changing the direction of some of the slabs.”

Echo also allowed for service ducts based on the architectural plans and suspended ceilings were created 600 mm below the soffits of the roofs and first floors to accommodate electrical, plumbing and air-conditioning services. 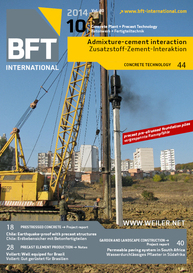 Hollow core slabs are prestressed and precast concrete elements, manufactured using long line steel casting beds. They are typically 1200mm wide (but can range from 600mm  2400mm) and between 150mm...

Hollow-core slabs weigh up to 40% less than solid floor slabs, thus requiring less concrete in manufacturing. Therefore, they are widely used all over the world; however, the width of the slab is...

Use of prestressed concrete in floor slab production

Precast prestressed floors slabs from Echo-Elbe consist of a lower and upper concrete layer connected to each other via the webs. The prestressed strands and/or wires in sizes 5.7, 9.3 mm and 12.5...

Ducon Concrete Ltd., Kanturk, Ireland, is expanding their production of hollow core slabs with a new Slipformer S-Liner from Echo Precast Engineering, one of the seven companies belonging to the...