The use of alkali activated binder systems becomes increasingly important in concrete technology. Besides the ecological aspects, especially the reduction of the CO2 emissions when producing the binders, the improvement of special concrete properties which is achieved by using these binder systems is gaining importance. Alkali activated binders with lower calcium contents are often also called “geopolymers”. The reactions of the geopolymer binder system required for strength formation differ significantly from the reactions already known from the systems based on Ordinary Portland Cement (OPC). Mainly calcium silicate hydrate phases are formed in OPC-based systems, whereas in geopolymer systems, mostly inorganic three-dimensional aluminosilicate networks are formed. In this paper, results of extensive laboratory tests as well as several practical applications of a geopolymer concrete, the Wagners Earth Friendly Concrete (EFC), with a binder system consisting of a ground granulated blast furnace slag, fly ash and custom-made activators and concrete admixtures are presented with respect to the special properties of such systems. Due to their high resistance to chemical attack, geopolymer concretes are particularly suitable for (reinforced) concrete members, which are severely attacked by acid or sulphates, for example sewage pipes or building members with a high sulphate content in the surrounding (ground) water.

In Australia, substantial experience has been gathered using a geopolymer concrete for different applications. For example, when building the Toowoomba Wellcamp Airport, mostly geopolymer concrete was used, only in the airfield and aprons approx. 23.000 m³ (see Fig.). 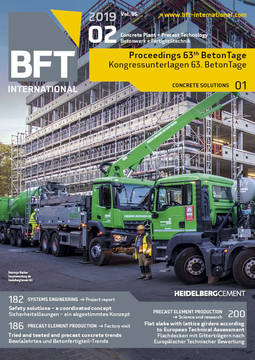 Production, testing, approvals and practical use

In the context of mitigating climate change, one of the key demands is to reduce the CO2 emissions generated in the production of cement and the concrete containing it. However, since the process of...

Opportunities arising from the use of innovative binders

Concrete structures are subjected to a wide variety of exposures. In pertinent codes and standards, these exposures are allocated to typical use scenarios. In the case of concrete corrosion triggered...

The future of building materials in research and practice

This year, the organizers were able to welcome about 750 scientists and actively working engineers, coming from more than 40 countries, for an intensive exchange of views on three days in September....

New binder as substitute for cement

Concrete is by far the construction material manufactured in the largest quantities worldwide. Its enormous significance in the context of the current sustainability assessment demonstrates clearly...

Method for attenuating dark discolorations on facing concrete surface, readymix which cures to concrete, and cement for producing concrete