Contrary to what one might think, the site located close to the city center at Bochum’s eastern ring road between the former, Wilhelminian-style Gymnasium building, a brewery and the former goods station has been a kind of brownfield land since the end of World War II. At the beginning of the new millennium, the “Gymnasium am Ostring” was in such dire need of renovation that the city opted in favor of a new building in a new location.

Bochum’s existing local and regional court had, until now, resided in a building which dated from the 1970s and was contaminated with harmful substances; the labor court was housed in a different location. The city recognized the opportunity to develop a court district close to the city center by bringing the three courts together at the eastern ring road.

Berlin-based design office Hascher Jehle Architektur came out as the winner of the competi-tion organized in 2008. Their concept was based on retaining the Wilhelminian-style façade of the school building – not least because they considered it to contribute to the identity of the city’s more recent history. It was the place, after all, where many generations of “Bochumers” (including the famous German singer Herbert Grönemeyer) had passed their Abitur exams. The old building, which now accommodates the canteen on the ground floor, was integrated into the new ensemble of buildings and played a decisive role in their design. It was, however, also of structural relevance: its ground floor was specified as the uniform floor level of all building wings, and its historical cornices served as a model for the all-round friezes decorat-ing the wings of the new buildings.

The courtroom wing of the Justice Center is an enclosed, russet-colored cube which is linked to the old school building by a two-storied connecting structure. The core building also in-cludes the only regular access to the entire building complex. Upon entering the building, eve-rybody – whether visitor or employee – needs to undergo a security check similar to those car-ried out at an airport. Behind the security checkpoint, a difference in level of 1.80 m needs to be overcome to reach the continuous ground floor level. One has now entered an atrium which is as high as the building and paneled in oak. “With our design, we wanted to communicate that this is a court, not a children’s day care center,” says Friedrich Dröge, project-leading ar-chitect at the Berlin-based design office Hascher Jehle Architektur, explaining the modern-representative design vocabulary of the façade. To explain the seemingly irregular sequence of narrow vertical window slits, large glass screens, and closed wall surfaces produced from in-tegrally pigmented, russet-colored exposed concrete elements, he adds: “A court administers justice. As a defendant, you enter the building with an individual case on your hands. We have deliberately refrained from a grid-patterned façade design because we wanted to empha-size the individual nature of each case and did not want to make ...”

Read the full text (only German) in the Beton Bauteile 2018 yearbook (see right).

The article is a preview of the Beton Bauteile 2018 yearbook (ISBN 978-3-7625-3679-6), which will be available in German at www.profil-buchhandlung.de and in local German bookstores from 1 December 2017.
This article appeared in 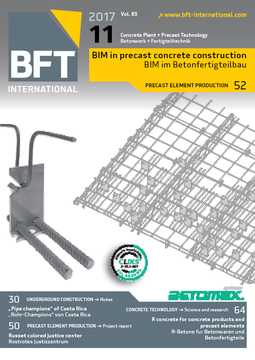 The new Munich Criminal Justice Center building is currently the largest building construction project of the Free State of Bavaria. Its façade extending over an area of about 21,000 m² was clad...

All standards for small wastewater treatment plants are still in process and it can be assumed that the judgement of the European Court of Justice has some influence on the content of the stan-dard EN...

Completed, finally! The rehabilitation of the street Untere Breite Straße in the city of Ravensburg had dragged on for more than two years. The city celebrated the grand opening mid October 2015,...

Specialty chemicals company Lanxess presented its third Colored Concrete Works Award in Berlin on May 17, 2017, to a distinguished architect who has achieved something unique in the use of colored...