The first concrete buildings being printed in Germany have shown that digitalization found its way into the construction site and that the future has arrived in the construction industry as well. Since 3D concrete printing is addressing to the shortage of skilled labor, and it is possible to optimize the material input by an intelligent design, this additive manufacturing technology has the potential to construct buildings faster and at lower costs, with contributing to sustainability at the same time.

The basic concept of the exterior walls of these buildings comprises printed permanent formwork which is either supplemented with insulating material or cast-in-situ concrete. The interior walls of the buildings were also printed, allowing for a quite individual layout of the living spaces.

The buildings were printed by Peri GmbH, one of the leading suppliers of formwork and scaffolding systems for the construction industry. The BOD2 gantry printer was developed by the Danish company Cobod, in which Peri has held a share since 2018. The print head moves in all three spatial axes on a fixed metal frame. This allows the printer to move to any position within the structure. During the printing process, the printer, moreover, takes account of conduits and connections for water and power supply, for instance, which will be laid at a later stage.

The purely mineral building material “i.tech 3D” used for printing was developed by the HeidelbergCement subsidiary Italcementi. The material was designed under concrete technological aspects so as to ensure that, for one thing, it is easy to pump, and for another thing, easy to extrude. An adequate load-bearing capacity is developed at a very early stage so that the lower layers are able to carry the load of the upper layers. At the same time, the bond between the layers is ensured. The excellent interaction of the material and the BOD2 printer allows for a smooth construction process.

This completely new construction method implemented in Germany for the first time has passed all official approval procedures without any problems in 2020. The approvals granted by building authorities were accompanied by Ingenieurbüro Schießl Gehlen Sodeikat and the Technical University of Munich regarding their expert opinion.

As part of the lecture on the project, the printer and the material will be presented, with briefly outlining the concept of the building and the approval procedures. 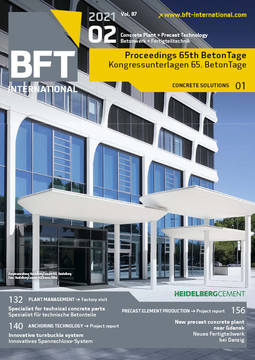 Two years ago on September 11, 2017 Cobod invited the press to see the start of the 3D printing of The BOD, Europes first 3D printed building. Now with their newly developed second generation BOD2...

Peri and Strabag 3D print an office building in Austria

Peri, the German distributor of Cobods 3D construction printers, revealed the project in Beckum at a press conference on September 29, 2020. This milestone for the future of the German construction...

Additive production processes have been employed in aircraft, automotive or mechanical engineering, in dental or medical technology for many years, especially in prototype production. Increasingly...

The first residential home from the 3D concrete printer in Germany was awarded the German Innovation Award by the Design Council. The two-story single-family home in Beckum in the German State of...