Construction trade fairs are being held now on every corner of the globe. Many of these events are also of special interest to the precast concrete industry – sometimes more, sometimes less. Trade show venues are sprouting out of the ground like mushrooms, in particular in the growth markets, with the result that both exhibitors and visitors are taking a closer and closer look to determine what event is in fact worth attending. It’s therefore all the more remarkable that in Germany of all places, a country blessed with a multitude of such events, a new trade show will open its gates. econstra (25 to 27 October in Freiburg) is described as the first trade fair for civil engineering. What does econstra offer? What will be different? We talked with the organizer, Thomas Dieterle (beginning on page 62).

At a trade fair catering to an entirely different industry, a successful example of promotion for concrete was, incidentally, seen in late April. As part of FIBO, the leading international Trade Fair for Fitness, Wellness, and Health, held in Essen, Strongman ClassX took place – a sports competition among the strongest men on earth. Apart from the bodybuilding equipment and protein drinks offered, Beton Marketing Süd GmbH entered the spotlight as sponsor – that’s the type of image advertising we need!

Preparations for another mega event are already now underway. On 8 June, the European Soccer Championship will start in Poland and the Ukraine. Together with the companies Cemex, Pemat, and Wasa – we would like to invite you to participate in our BFT-Tipp game. Organize your own competition during the European Championship and join hundreds of other BFT readers in the fever of excitement of outguessing each other. The winners can look forward to some great prizes. To join, simply register free of charge at ↗www.bft-international.com/de/em-tipp. Good luck and good fun! 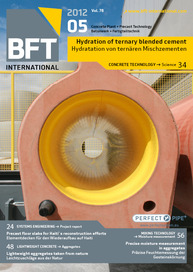 For the precast concrete industry, the year started off with a good number of international trade shows. At the end of January, for example, one met in Charlotte for The Precast Show. For many...

!econstra: The meeting point for everything involving construction and civil engineering

Services by construction and civil engineers are incorporated in many structures  but they all too often go under in the light of what others contribute. This is in the process of change. An...

bauma tour For the first time, BFT INTERNATIONAL offered guided tours through the exhibition halls. Relevant topics had been determined before in order to attract interested attendees from among the...

Trade fair booths all over the world

 The Big 5 Show took place in Dubai in November as every year. This is the leading trade fair for the building and construction industry of the entire Gulf Region. Probst was also part of it in the...