Lujabetoni Oy was founded over 60 years ago. This third-generation family-owned business has become one of the leading concrete producers in Finland. Employing more than 800 people, of which approximately 120 at the Järvenpää plant, the company generates annual sales of about €100 million. Production takes place on three prestressed concrete lines, each 210 m long. The group of companies operates a total of 27 precast, concrete product and ready-mix plants in Finland and Sweden.

Lujabetoni has been one of the pioneers of 3D (BIM) modeling and IT-supported precast production since the 1990s. A key milestone was the launch of successful partnerships, especially with Tekla, the software company headquartered in Espoo in southern Finland. Today, all major Lujabetoni projects are executed in collaboration with Tekla – from the early stages including the preparation of quotations to final costing after completion. Another partnership exceedingly beneficial for both parties is the cooperation with Lahti-based Peikko, one of the world’s leading suppliers of (among other products) concrete connectors and fasteners as well as composite beams for precast and cast-in-place solutions.

The lion’s share of the precast products is delivered to the Finnish domestic market. In addition, Lujabetoni’s client base includes customers in the Stockholm area – the business operates its own Swedish subsidiary trading as L Betong AB.

Kari Turunen, Vice President of Luja’s precast division, proudly refers to the production output figures: On average, about 8,000 m³ of frame elements, 100,000 m² of hollow-core slabs and 5,000 concrete pipes, among others, leave Lujabetoni’s factory gates every year; in addition, a large volume of ready-mix concrete is produced.

Luja’s low-carbon concrete is a big step towards climate neutrality. Total emissions related to concrete production in Finland account for about 2% of the country’s carbon emissions (including cement production). But even this figure is too high and should thus be reduced. For this reason, Lujabetoni has launched Luja-Low, a low-carbon concrete, where half of the carbon challenge has already been solved. Complete carbon neutrality of production is targeted by 2040. Not least thanks to the company’s own R&D department, carbon emissions have already been lowered to about 40% below the industry average. Furthermore, recycled concrete is used to an increasing extent, which, according to the currently applicable Finnish standard, is possible for up to 30% of the total material quantity.

The largest investment in Lujabetoni’s corporate history amounting to about €25 million was the installation of a production line for the new “SL Superdecks”. “We launched the SL deck in December 2018 in order to increase capacity quickly for our main addressable market, the residential real estate segment in the Helsinki metropolitan area. This investment enables us to expand the annual capacity of ‘Superlaatta’ (SL-Deck) in the Finnish market by hundreds of thousands of square meters,” said Lujabetoni CEO Mikko Isotalo. “The plant location is excellent considering Finland’s key markets – the capital region, Tampere and Turku – and we have sufficient space and opportunities to increase production capacity further.”

Kari Turunen adds: “The special thing about the Superslab measuring 3,000 by 1,200 mm is the option of incorporating a major portion of the required technical components, such as sanitary and electrical. We want to use this recently launched product to enable our customers to complete their construction projects more efficiently.”

“State-of-the-art production would be unthinkable without the many years of trusting cooperation with our project partners and suppliers. In addition to Tekla, the software company mentioned before, this also applies to Elematic, the engineering business. Hollow-core slabs as well as ‘superslabs’ can be produced on their Multimaster system.”

“Other partners include Haarup for mixing equipment, Finncementi and Schwenk for cement, Peikko for fastening and anchoring solutions, Schöck for balcony reinforcement connections, Ecoratio for concrete chemicals, and Controls for concrete testing equipment,” Kari Turunen describes the current arrangement. When asked by the BFT editorial team, Peikko CEO Topi Paananen added: “For us as a supplier with a broad international presence, the partnership with Lujabetoni is of course a very pleasant home game – for both parties. We are pleased that concrete fasteners and composite beams from Lahti are used here, such as all column shoes for the prefabricated Lujabetoni elements.”

Yet, not all that glitters is gold: Because large amounts of steel were imported from Russia and Ukraine, security of supply in this sector was compromised considerably.

The situation in the energy market is considered to be somewhat more relaxed because the individual plants are designed for different heating systems – partly running on gas, but also on wood or coal. In addition, some plants operate at night to save energy, and a new nuclear power plant in Finland is set to come online shortly.

The next major contracts have already been signed, such as a hospital in Helsinki with 60,000 m² of space and a 250,000 m² logistics center, which will be constructed by a consortium of contractors. 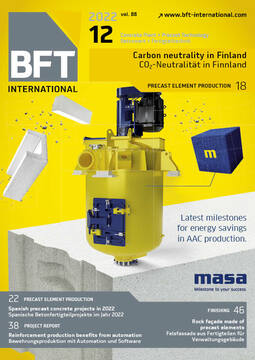 More than 30 representatives of Fib and Cerib made their way from France to the Hämeenlinna plant, located about 70 km of the capital of Helsinki, to obtain a convincing, first-hand impression of the...

Tekla Global BIM Award 2018 for Museum of the Future

Finlands Lemminkäinen has signed an agreement to sell all outstanding shares in its concrete business to Rudus, which is part of Ireland-based materials giant CRH. Rudus is based in Finland and...

Tekla customers understand the productivity benefits of Building Information Modeling (BIM). As part of the team in building the University of Virginia South Lawn project, The Shockey Precast Group...