Sustainable action, apart from climate change and digital transformation, is seen as one of the greatest challenges of our time. The definition of sustainability in this context is by no means so clear as one might think. The common maxim is to use the resources of our earth in such a way that future generations will also be able to satisfy their needs. Consequently social, economic and ecological impacts result that directly and indirectly affect the use or the preservation of resources. These impacts are diverse in nature, as is the preparation of concrete.

Various principles come into play here and, accordingly, the use of various mixer types: e.g., static mixers and dynamic-gravity mixers and forced-action mixers, among them single- and double-shaft mixers as well as vertical mixers with or without revolving mixing pan. The more demanding the end product, the stricter the requirements placed on the mixing plants: in particular, on the mixing tools. But the components – such as mixing blades, bottom tools and tool holder disks from conventional systems – are not necessarily always replaced by newly purchased products, but can also be reconditioned by resource-preserving means.

Worthwhile, not only for the sake of the environment

In Hanover, the concrete plant Leonhard Moll has upgraded its prestressed-concrete railroad sleeper production in two inclined intensive mixers with conventional mixing stars (Fig. 2), protected from wear with hard metal plates to ensure long service life. Manufacture of the wearing parts is for the most part very complex and associated with high energy and heat input. Reconditioning of the worn components is in any case worthwhile, not only for the sake of the environment. “Since resources are not inexhaustible, we have been employing, for several years already, possibilities for reconditioning our whirlers,” explains Matthias Schmischke, Maintenance Manager of many years’ standing.

At the modern production facilities in Hanover (Fig. 1), Munich, Biebesheim and Laussig near Leipzig in Germany, high-quality products for innovative trackways are manufactured, such as environmentally friendly turf track systems, 3-track sleepers and the ZSX twin sleeper. Since patent application in 1937, Leonhard Moll has extended its product portfolio up to longitudinal sleepers. With two production lines in its Hanover plant, the annual production capacity of these lines is around 300,000 prestressed-concrete sleepers per year. For the entire corporate group, the capacity is greater than one million.

With capacity utilization of this order of magnitude, well-functioning machinery and plants are a must. For replacement and wear parts, Moll depends on the reconditioning service of the company Krauskopf. As soon as the tools must be replaced – for example mixing blades, bottom tools and tool holder disks – they are shipped to the Odenwald plant for reconditioning (Fig. 3). Here, the skilled workers of Krauskopf Maschinentechnik GmbH & Co. KG test the parts for sufficient base support material to ensure problem-free reconditioning. In the next step, the worn hard metals are expertly unsoldered, fitted with new metals and once again smoothed (Fig. 4).

For Leonard Moll, reconditioning of components, in comparison to the purchase of new wearing parts, means savings of approx. 10,000 euros annually. For Schmischke, this represents an absolutely satisfactory price-performance ratio. “With reconditioned tools we reach in general the same useful lives as with new parts – so why should we not use this opportunity for sustainability in ecological and economical terms?”

With timely replacement of the tools, reconditioning is repeatedly possible: at Leonhard Moll, up to five times, before replacement with new parts is necessary. In connection with the use of a TuneMixx system, moreover, additional costs for labor, intensive exchange, assembly times and costly downtimes in production are eliminated. However, the principle of reconditioning applies not only for hard-faced mixing tools or mixing tools fitted with hard metal, but also for other components in contact with production and the repair and general overhaul of rotor- and mixing star bearings, discharge gates, friction drives and other components up to complete mixers (Fig. 5).

The green footprint is by now for many plant operators in other industries – such as the glass, ceramic-refractory and foundry industry as well – an important reason for the reconditioning, repair and general overhaul service of Krauskopf.

The mechanical engineering firm Krauskopf Maschinentechnik GmbH & Co. KG, founded in 2013, develops, manufactures and markets at its location in Buchen in the Odenwald region of Germany mixing tool systems, spare and wear parts as well as individual wear protection solutions for various mixer brands and types. General overhaul of used mixers and reconditioning and/or repair of mixing tools and mixing plant components is at times also part of the performance spectrum such as installation and inspection service and process-related consultation on location. 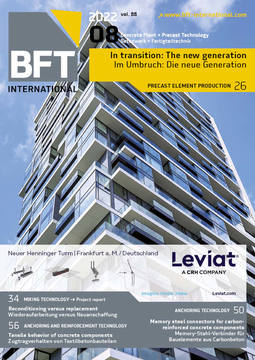 In the concrete sector, the preparation of concrete  the environmental-friendly construction material with a future takes place in a wide range of intensive mixers. Trough mixers in the form of...

Tool change is part of the normal routine for mixer operators. The mixing tool does most of the work during raw material preparation, and its condition has a major influence on the quality of the end...