The Finnish manufacturer Peikko brings to the market the world innovation Tenloc. The greatest advantage of Tenloc is the instant form-fitting and friction locking connection of individual precast elements to each other. Structural and loadbearing connections are established within seconds.

The two-part Tenloc element connector is housed in a box specifically developed for that purpose. The latch system can be turned by the fitter with a hexagonal spanner through the opening in the box so that the latch encloses the reinforcing bar on the opposite side. The fitter initiates the actual tensioning process by continuing to turn the spanner after locking, thus establishing a flush connection.

In the precast plant, the two parts of the element connector are positioned on the form tables prior to casting. Special markings and spacing strips on the boxes containing the latch and anchorage system facilitate exact positioning.

Within the scope of the comprehensive tests carried out with Tenloc, Peikko cooperated, among others, with Xebex, a leading supplier of precast elements for building construction headquartered in the German city of Bad Dürkheim. One of the first successful pilot projects to be completed was an oversized precast garage, fitted with Tenloc element connectors.

Peikko has the production facilities of the Tenloc element connectors regularly tested and certified by independent institutions. 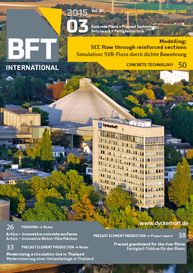 Peikko Group is a leading global supplier of concrete connections and composite structures. It is a family-owned and run company with over 1,200 professionals. Peikko was founded in 1965 and is...

Early precast designs showed less than perfect earthquake performance. Common reasons for the failures were inadequate detailing, poor workmanship and lack of continuity or redundancy in the...

Peikko has extended its commitment to the Australian market by moving to a larger facility of 2,000 m2 located in Yatala, near Brisbane. The new premises allow Peikko to upscale its local...

Peikkos patented PVL-product has national approval for static loads and has gone through a rigorous testing program at the VTT Technical Research Institute of Finland. The product becomes available...

The Bolda column shoe is a new generation of bolted connections for precast columns made by Peikko with a high load capacity. It is more lightweight, more efficient and more compact than predecessor...