A new shopping paradise has been created in Stuttgart: At Mailänder Platz (“Milan Square”), the largest shopping center in the state of Baden Württemberg, the Milaneo, opened its doors in early October 2014. Three Milaneo buildings were constructed on the site of the former freight train and shunting station, directly adjacent to the spectacular New Library building. Their generously designed architecture features large atria and three stories per each building. The property’s total commercial floor space amounts to about 43,000 m² and includes 200 stores, service areas and a large number of restaurants. More than one million people visited the center in the first week after its grand opening. The floors above the shopping mall will accommodate a seven-star hotel, office spaces and 415 apartments, which are currently under construction.

ECE Projektmanagement GmbH & Co. KG and Strabag Real Estate GmbH jointly built this impressive shopping cen-ter with underground car park according to a design by Düsseldorf-based architects RKW Rhode Kellermann Wawrowsky Architektur + Städtebau. In 2013, RKW had received the MIPIM Award for this project in the “Best Future Mega Project” category. Upon completion, the new urban quarter at Mailänder Platz will be unique in its diversity. As one of the first developments of an entire quarter, this mega-project was granted a DGNB Gold pre-certificate by the German Sustainable Building Council (DGNB).

DGNB-certified buildings are subject to demanding specifications for the construction products used in such projects. The sophisticated product portfolio offered by Sika Deutschland GmbH conforms to these particular requirements; designers and contractors were convinced of the performance of the systems used for the sealing and coating of underground car park pavements and floorings at the Milaneo.

The underground car park includes three levels that extend across the entire area of the property. Sections of the underground car park ceiling that are used for outdoor facilities and planted areas (rather than being occupied by buildings on top of it) were to be reliably protected against moisture ingress from the top.

The company contracted with these works, ESB Kirchhoff GmbH, installed the Sika Ergobit torched polymer-modified bitumen sheet composed of a top reinforcement inlay and atactic polypropylene (APP) after preparation of the concrete base in accordance with ZTV-ING specifications.

Ed. Züblin AG applied a rigid OS 8 coating system to the underground car park pavements. The contractor opted for the Sika CarDeck Static E system. This coating system is cost-efficient, robust and long-lasting whilst also providing a particularly high wear resistance. The system also includes a primer consisting of the Sikafloor-161 two-component epoxy-resin binder with high mechanical strength and the Sikafloor-264 sealant, which is impermeable to liquids and resistant to many types of different loads. To provide the best possible guidance system, various colors were used for marking the three underground car park levels. The fact that this tried-and-tested coating is a rigid system requires annual inspections to make sure that coated areas are still fully functional. This inspection scheme ensures that potential damage is identified and repaired at the earliest possible point. Regular inspections have been agreed upon in a related maintenance contract.

Floors in the basement-level service areas were to be dust-free as far as reasonably possible. farbtex Kaltenbach + Maier GmbH & Co. KG coated all floors of service, bicycle and ancillary rooms with Sikafloor-2550 W. This two-component, water-dilutable epoxy-resin-based coating for smooth and broadcast floorings is suitable for slight to medium mechanical and chemical actions in basements and warehouses.

Construction work on the extensive underground car park of the Milaneo began in April 2012. Overall, about 800 workers were involved in the sealing and coating works, which were completed at the end of September 2014 so that about 1,700 underground parking spaces were made available to shoppers right on time for the grand opening of the Milaneo mall. 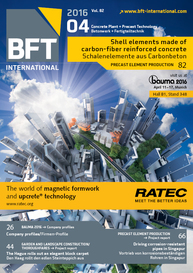 Like in many other German cities, the Rheydt city center is suffering from a significant loss of functional diversity of its urban space, which is due to the dynamic development experienced in the...

11,000 m² concrete surface in a parking structure in Limburg renovated

After 39 years in service, the parking structure City-Parkhaus in the German city of Limburg was in poor condition: Due to insufficient surface protection, the reinforced-concrete floors were badly...

Non-structural pavements can also be used to create paved parking areas directly on the ground in parking facilities or on parking decks, in underground car parks or on driveways, provided the...