What lies ahead for the Russian construction and concrete precast industry? In spite of or rather because of the ongoing political crisis, this question is currently troubling all Russian experts active in these fields of the industry. Accordingly, there was a huge attendance at the International Construction Forum “Cement. Concrete. Dry Mix” which took place in Moscow from December 2 to December 4 and was to provide answers to this question. BFT International attended the Forum for the first time.

The Forum comprises a trade show and a scientific conference. It is organized by trade show organizer Alit Inform; co-organizers are the “Association of Russian Construction Companies” and the “National Agency for Housing Construction, Namiks”. The event is hosted under the patronage of the Russian Parliament, the Russian Ministry of Housing Construction and the City Government of Moscow – an important prerequisite in Russia to ensure the long-term success of an event on the one hand and the attendance of decision-makers from administration and large enterprises on the other.

The exhibition space was fully sold out in Pavilion 7 of the Expo Center, the exhibition center situated right in the heart of Moscow’s political and economic capital. In total, 156 companies of the supply industry presented their products and services, including renowned machinery and plant manufacturers such as Teka and Eirich, Meka, Doubrava, B+S or Nordimpianti. On all three days of the event, the exhibitors were delighted to welcome a large number of visitors to their stands.

Both the symposium and panel hosted by BFT International on the subject of “State-of-the-art technologies in precast production. European know-how”, moderated in the Russian language by Editor-in-chief Christian Jahn, also aroused much interest. Around 150 participants heard lectures given by representatives from renowned universities, such as the École polytechnique fédérale de Lausanne or Loughborough University, by companies and construction authorities of the City of Moscow. In terms of content, the lectures covered topics such as “Building with precast concrete elements from planning to implementation” and “Steel fiber concrete with improved plastic properties”.

A visit to the DSK Grad precast concrete plant operated by construction and real estate group Morton on the third day of the event counted among the highlights of the International Forum. In an exclusive report published in the 08/2014 issue of the BFT International magazine, we reported on the progress of the plant’s expansion as per the summer of 2014. In the meantime, almost all systems have been installed in the plant’s buildings close to the village of Kotovo, about 65 km to the southwest of Moscow’s MKAD orbital motorway, and are undergoing trial operations.

An Elematic system comprising six heated lanes for the production of hollow-core slabs has been installed in the first bay of the factory building; in the second bay, tilting tables and molds from Weckenmann have been set up for the manufacture of, among other things, sandwich elements, beams and girders; bays number three and four accommodate the components of a circulation system from Sommer Anlagentechnik including formwork robot and curing chamber for the production of sandwich walls. Steel reinforcement is produced on a platform above the Sommer plant. A fully automated system for the introduction of formliners from manufacturer Reckli is currently being installed. Russian crane manufacturer Optim supplied 64 cranes.

The next “Cement. Concrete. Dry Mix” Construction Forum including conference and trade show will be held in Moscow in November 2015. If you wish to attend as an exhibitor, speaker or visitor, pertinent details can be obtained from the BFT International editorial team or from the event organizer, Alitinform. 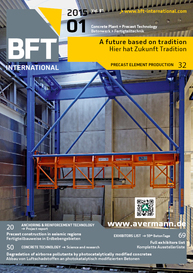 With as many as 7,000 visitors to and 600 exhibitors represented at last years trade show, as well as 200 participants attending the related symposium, ConTech/Precast has become one of the most...

Familiar faces, new business cards. Normally, the matter would be clear and not worth mentioning  change of employer. At bauma CTT Russia 2018 in Moscow, the largest trade show for construction...

Alitinform has issued a final call for papers for the conference and exhibition Mix Build 2018. The 20th international conference Modern Technologies of Dry Mixtures in Construction ...