The investments will increase the degree of automation at the Plaidt plant, which includes three carousel lines supplied by Progress. The first two lines were extended in quick succession with MSR cross-wire straightening and cutting machines followed by VGA Versa lattice girder welding machines. A Wire Center will be added to the third carousel line in 2021.

Flexibility was also the key for the VGA Versa lattice girder welding machines, which were additionally fitted with an acoustic enclosure. Romey attaches great importance to pallet utilization, which also means that the pallets sometimes include three or four different lattice girder heights. In this setting, it is crucial that the girder height be changed quickly and automatically during the production process. The VGA Versa is the best choice in this regard because it is the only machine on the market capable of adjusting the height fully automatically within only a few seconds while at the same time welding the five wires of a lattice girder together in a continuous resistance spot welding process. This results in higher productivity and meets the objective of the new investment in the plant. The compelling performance of the first machine prompted Romey to purchase a second machine shortly thereafter. In fall 2021, a Wire Center for double wall production will be installed in order to provide additional reinforcement automation. The Wire Center lays the reinforcement according to CAD specifications, which results in an optimized process that increases production output and dimensional accuracy.

The fully automated precast element carousel lines primarily produce precast floor slabs for smaller projects. Accordingly, Romey mainly supplies single- and multi-family house projects in Germany and Luxembourg, as well as in France. The three pallet circulation systems operated at the premises produce up to approximately 5,000 m² of floor slabs and up to 1,000 m² of double wall elements per day. The newly installed reinforcement systems provide additional support for adhering to the tight cycle times.

Managing Director Reinhard Vogt comments, “We were afraid that the new machines would not be able to keep up with about eight pallets per hour, but they manage to do so without any failure or breakdown. We haven’t lost a day due to technical problems in over a year.”

Keeping production downtime caused by assembly to a minimum was imperative for Vogt. Progress supplied large assemblies; the company tests and assembles small-scale electronics at its own plant beforehand. This arrangement saves a lot of time during assembly – after all, it is impossible to catch up in terms of output after periods of downtime, which is commercially unviable for producers.

“Progress does not shy away from challenges such as complex installation conditions or installation during ongoing production, as was the case with our MSR machines,” explains Vogt and adds, “We started work earlier and Progress started assembly later and assembled half the night. We then agreed on a similar arrangement for installing the VGA Versa machines. It is quite unusual to get this level of commitment, so Progress does stand out from its competitors in this regard.”

Progress through trust and quality

The managing director stresses that such an investment is not just about good machines, but much rather about the people with whom you do business. This requires mutual trust, which, according to him, is definitely part of his dealings with Progress representatives. Vogt adds, “In addition to the existing trust, the in-house programming and service departments are an invaluable asset. If something didn’t work, no matter what it was, it took only a few hours to get everything fixed again. This is what ultimately influenced our investment decisions, including in favor of the Wire Center in 2021.” 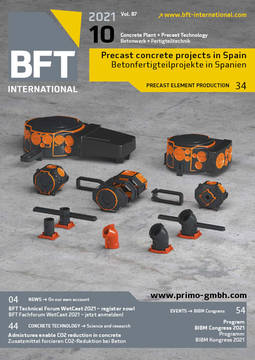 Modern manufacturing proc-esses call for innovative machinery, which are able to operate in a highly efficient and very reliable manner, in order to meet the high standards of economic operation....

more
Issue 2010-11 Straightening Methods - The State of the Art

Mesh welding lines for the precast and ­construction ­industries

Eurobend offers one of the most comprehensive range of mesh welding lines for the production of any type of mesh used in precast operations and in the construction sector in general. In addition to...

Eurobend GmbH offers solutions for every precast company, regardless of size and application, with innovative and well-established machines for the production of standard and customized precast...

In addition to the offered broad range of welding lines for the production of standard and specialized construction mesh, engineering, precast or architectural mesh, Eurobend GmbH offers a full range...