“The Rolex event required level spaces where furniture could be accommodated and where people could gather and mingle. Timber decking had been initially mooted but on close analysis this solution proved impractical. As an alternative I proposed leveling the slopes into a series of stepped terraces which would not only provide a venue for the Rolex event but would serve as a user-friendly outdoor sanctuary for students and theater goers, as well as for staging subsequent events.

Quicker to install than natural stone

The lower and largest of four terraces was surfaced with a combination of Kent Random Edge paving and grass. This large flagstone paver has a slightly irregular edge and a subtle hewn surface with natural indentations which lend it a time-worn appearance. It was also used to pave the top of the steps and the stone benches which were built into the retaining wall.

“The Revelstone products were much quicker to install than natural stone and they will last much longer,” advised van der Merwe. “We had to create a path on the lawn for high-heel users and we laid the Kent pavers in a random pattern which I designed for the other terraced areas as well.”

The Rolex Arts Weekend was a culmination of a year’s planning which saw more than 200 renowned artists and arts leaders from South Africa and around the world gathering at The Baxter. The Weekend involved a series of talks, readings, exhibitions and performances, and featured the work of the 2018-2019 protégés of the Rolex Mentor and Protégé Arts Initiative, along with their mentors. Highlights included dance, architecture, literature, music, arts symposia and cinema.

Well over 500,000 patrons attend over 2,700 performances at The Baxter annually, making it one of the busiest theaters in Southern Africa. Founded in 1978, it has stayed true to its promise of always being open to all and to stage work of the highest artistic quality. It aims to reflect the cultures of all South Africans on its stages, its foyers and spaces, thereby promoting an interactive and meaningful relationship with its audiences and patrons while generating a spirit of goodwill and nurturing creativity. 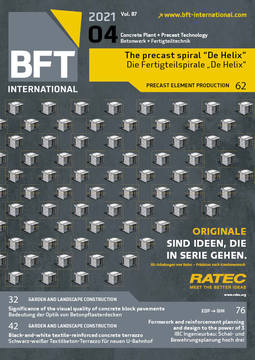 Every two years in Germany, thousands of trade visitors attend the Gala-Bau Trade Show in Nuremberg to learn about future trends in garden design and landscaping construction. Among the exhibitors at...

Grand Canyon in the townhouse backyard

If natural stone isnt even good enough  reads the advertising slogan of Gerwing Steinwerke for their Rock Wall stone system. Actually, the visual appearance of the garden wall made of this...

Our May 2018 issue included a comprehensive report on the activities of the South African precast producer Cape Concrete Works. As promised back then, we are now following up on this coverage by...