Brazil has the highest level of industrialization of all economies in Latin America and it has been one of the ten largest economies with a market economy orientation since 1990 [1]. The country continues to develop all the time. The gross domestic product amounts to more than 750,000 million US dollars. 24% of the population are working in agriculture, 56% in the service sector and 20% in industry and the construction sector [2].

The industrial organization of planning and construction processes is an essential factor for increasing the productivity of the present-day construction output. Just a few major corporations dominate the construction industry in Brazil. As to be in the position to meet the demand, prefabrication plays a distinct role in these construction companies. This does not only apply to the housing market, which advanced to the most interesting markets across the world. It also applies, amongst other things, to penitentiary. According to estimates of the “Inter-American Institute of Human Rights” (IIDH), one million persons held in custody at present in the overcrowded prisons of Latin American – almost one seventh of them in Brazil [3]. Brazil’s prisons have a capacity of 74,000 places. Actually, there are however around 170,000 prisoners in the detention centers and police stations at present. Thus, there is a lack of about 96,000 places [4]. Hence, the construction industry is faced with huge demands.

The construction company SISCOBRAS (Sistemas Construtivos do Brasil S. A., Avenida Farroupilha 8001, 92425-900  Canoas, RS, Brasil) has taken over this task. Apart from the headquarters in Canoas, the company has a subsidiary in Ivoti. In 2009, SISCOBRAS was founded as an affiliated company of VERDI – Construções S.A. The company mainly concentrates on an industrialized construction of buildings for penitentiary. Here, the main focus lies on prefabricated modular systems made of high-performance concrete (called: “CAD” concrete – Concreto de Alto Desenpenho) assembled of plane precast concrete elements. The SISCOPEN system – SIStema COnstrutivo PENitenciário – was patented and dominates the South American market today. The company offers penitentiary centers in different dimensions for male and female prisoners, whereas the functional concept is adapted to the conditions prevailing in Brazil in an optimum way. The basic range includes prison buildings for 600 arrested persons. Whereas a modular construction system is exclusively used for the area where persons are held in custody, the commercial section was built in a traditional way up to now. However, the company was forced to rethinking owing to the business situation of the last few years.

In order to be in the position to meet the rising demand for penitentiary centers, it was necessary to rationalize the building sections of the penitentiary centers constructed traditionally. For this purpose, the company aimed at cooperating with German manufacturers of modular steel systems. With the German company Graeff Container & Hallenbau GmbH an agreement was reached for the manufacturing of steel containers for the commercial section of the penitentiaries. The product FastFlex developed from this collaboration, a joint project of the companies Graeff Container & Hallenbau GmbH/Mannheim and SISCOBRAS. The basis is a supporting frame made of steel sections. The production is carried out in the factory of Verdi Construcoes S.A. in Canoas (SISCOBRAS). The Brazilian staff was trained in Germany for this purpose.

Yet, various prototypes are already taken up in production. Different designs are used as infill panels, such as full surface GFRP elements, steel sandwich elements with polyurethane foam and/or mineral wool, cementitious slabs for floors and/or wet rooms, trapezoidal plates made of steel or aluminum as roof covering, etc. It was possible to bring the CAD concrete modules as well as the FastFlex modules successfully to the market. At present, there is a strong demand for the high-quality components, which, amongst other things, are also used for buildings in the field of health care, school, police and security systems.

The modular units made of CAD concrete are produced in Ivoti. The company has acquired there an area of approx. 30 hectares with production buildings of a former tannery and intends to relocate the entire production of glass-fiber reinforced “GRC” modules (glass-fiber reinforced concrete) and FastFlex modules to this location in the long run. About 12 months have passed from the preliminary planning up to the start-up of the subsidiary in Ivoti. The factory started operation at the beginning of 2011 and further 12 months are scheduled until the factory will be running at full production level. The factory produces to stock, thus it is in the position to erect the facilities being ready for occupancy within 6 months.

High-grade CAD concrete having a compressive strength of 80 MPa (N/mm²) is used to realize the modular construction system. The modular units are assembled of plane precast concrete elements. These plane elements are produced in horizontal position. At present, the factory is furnished with 3 different production lines running in parallel. The circulation period of the formwork is once per day, the formwork is removed from the floor, wall and ceiling elements manufactured after 12 hours, and then they are stored. After about one week, the plane precast elements are assembled to modules with the aid of templates and the connections are welded. Thereafter, the completion of the interior is started, where even the furniture is made of GRC. The surface of the modular system is finished with a coating at delivery.

Escape-proof wall systems are only realized after assembly of the individual modular units on-site: The inner panel made of CAD concrete has a maximum wall thickness of 45 mm. The boards between two modular systems create the formwork required for an overall wall thickness of 100 mm between the structural units. The spaces of the modules are simply casted in-situ after assembly. The roof construction is designed with double shells. The upper shell is provided as watertight white concrete with a surface finish having an inserted thermal insulation. A layer of white concrete with ASR fibers, three-ply having an overall thickness of 12 mm, is sprayed on the formwork. Afterwards the insulating boards are inserted and the joints are grouted. The CAD concrete is self-compacting; the surface is free from pores and indestructible when hardened. It is similar to polished marble.

The individual processing steps in the factory are subject to an ongoing quality control. However, the topic “sustainability” plays an important role, too. Waste is disposed of separately and recycling materials are used reasonably.

White cements are exclusively used for the production in order to be able to meet the high quality standards of the penitentiary. The cement of class ARI (high-grade) is imported from different countries (Egypt, Mexico, and others), as there are no appropriate products available in Brazil. The aggregates consist of locally available white limestone. Alkali resistant glass fibers are used as reinforcement, imported from Europe or Asia. The glass-fiber reinforced concrete has a sand-cement ratio of 1:1 and does not contain any coarse aggregates. The cement paste is premixed in the mixing machine, blended with glass fibers and poured in molds or pumped through a spraying gun for application. The spraying gun is furnished with a cutting unit for cutting the long glass-fiber rovings into chopped fibers in a defined length that are added to the cement paste. Chopped fibers and cement paste combine when applied to the formwork surface. Additives optimize the mixture with the result that inclusions of air deaerate without compaction and an optimum distribution of the fiber is achieved.

The production method for the GRC was developed and optimized by the factory itself. Customary equipment was used for the concrete station, traveling cranes, fork lift trucks, pallets, welding apparatus and hand tools.

The production of the CAD modules is running at full capacity at the present one-shift operation. The factory is manufacturing about 30 units per month of the FastFlex modules, which are relatively new on the market. The production, however, is to be extended to about 800 units per year. A monthly production of the SISCOPEN system for 600 prison places is furthermore planned. The increase in production needed can be realized relatively easy by the implementation of a two- or three-shift system.

SISCOBRAS is considered to be an innovative and leading company in Brazil and South America in the field of the construction of penitentiary centers. In the medium term, the company is planning additional factories in Brazil preferably in the north and north east regions as well as in the center of Brazil. By developing networks with universities, research institutes, industry experts, consulting offices, etc. SISCOBRAS was already in the position to establish a solid national and international basis for the company. The co-operation with the German company is new and certainly an additional milestone in the company’s history. 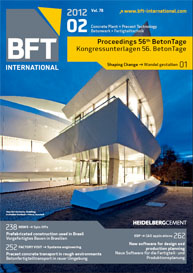 Modular precast concrete units made by Haitsma Beton are partly used for the construction of the new penitentiary building in the Dutch municipality of Zaanstad. The construction consortium consisting...

Methods and devices for modular construction