Right in the heart of the city of Heilbronn, adjacent to the Stadtpark, a luxury 4-star plus hotel was built featuring an innovative concrete façade. The design developed by Berthold Architekten BDA, who also took responsibility for the detailed design stage, follows a sophisticated approach for continuing the development of the existing buildings forming part of the Harmonie City Hall with the Theodor Heuss Auditorium while citing the formal language of the 1960s.

The façade shows an articulation into horizontal cornices and vertical pilasters consisting of white architectural concrete. These concrete elements frame the large-sized window surfaces. “The cornices consist of solid precast elements that, at the same time, assume the load-bearing function of balcony slabs. This is how we eliminated the need for involving additional trades and were even able to dispense with scaffolding completely. Instead, we installed the windows and railings from inside in a subsequent work step,” explains site manager Mike Vivas of the PSB Vivas engineering practice based in Hohenfels.

The cornice elements weighing up to 7 tons and the pilasters were produced at the Ebhausen precast plant. The white shade was achieved by adding white cement and brightening titanium dioxide pigments. The specification of architectural concrete posed a major challenge to the formwork contractor. They turned the formwork, which also accommodated the load-bearing insulation elements supplied by Schöck, by 90° in order to pour the concrete through the connecting opening. This side will no longer be visible in the final condition. “Prior to concreting, we cut the Schöck Isokorb elements into 500 mm halves and installed them in a 500 mm spacing. This approach provided sufficient space for us to pour the concrete into the gaps and to compact it using an internal vibrator,” Stefan Allmendinger, of Rau Betonfertigteile GmbH, recalls. This is why Schöck Isokorb T, Type K elements make up a total length of 4 m within each of the 7.50 m long cornice slabs. On the construction site, the resulting blockouts were subsequently filled with Schöck Isokorb T, Type Z intermediate insulation elements.

Precast elements were produced four to six weeks before their scheduled installation in order to ensure smooth construction progress. Seven trucks fully loaded with precast elements were needed for each floor, resulting in a total load of over 1,000 tons. “We made a huge effort to protect the white precast elements in the construction phase. For this purpose, the elements were covered with a nonwoven protective material to prevent soiling when erecting the next story. This cover layer had to be additionally protected by OSB panels due to the mechanical impact,” explains Wolfgang Brodbeck, of Gottlob Brodbeck GmbH based in Metzingen, the contractor in charge of the entire shell construction phase, with regard to the implemented precautions.

Schöck Isokorb: Part of the insulation and structural system

Over a total length of 1,000 m, the cornices were designed very similar to balconies since they are freely accessible and secured by railings. The narrow cornice elements have a projection of only 60 cm. The Schöck Isokorb T, Type K element was the perfect solution for ensuring thermal decoupling of these components from the floor slabs. This element features an 80 cm thick insulation layer and is equipped with the HTE-Compact compression module. The load-bearing insulation element for freely projecting balconies is also part of the structural system and transmits negative moments and positive shear forces.

“The hotel building rests on driven concrete piles. Its two basement floors and the ground-floor level consist of a conventional reinforced-concrete structure. Starting with the first floor, we divided the individual rooms on the cast-in-place floor slabs using reinforced-concrete double-wall units filled with in-situ concrete after lifting them into their vertical position,” Brodbeck explains. However, it is not the external walls abutting to the faces of the internal walls or bulkheads. Instead, the vertical pilasters assume the function of the external wall and of the façade. These precast elements measuring 57 × 42 cm rest on the horizontal cornices while being fixed to the vertical components with custom V4A steel fasteners.

“We used a crane to place the horizontal cornices with installed Schöck Isokorb elements on top of the pilasters and temporarily supported them on a custom slab table structure. This is how we were able to align the elements with pinpoint precision and pour the in-situ concrete together with the floor slabs,” Brodbeck describes. Once the concrete topping has hardened, the cornice elements are firmly fixed to the floor slabs via the rebar integrated in the Schöck Isokorb T, Type K. After about two weeks, construction could be resumed to complete the next floor while eliminating the need for costly scaffolding. Completion of the building shell meant that the façade was also installed completely. These work steps were repeated up to and including the ninth floor because these levels accommodate the standard hotel rooms. The tenth floor shows a different façade pattern owing to the different heights of the conference rooms.

“Staircases and elevator shafts are located on the north side. In this area, we obviously couldn’t use floor slabs for attaching the Schöck Isokorb elements. This is where we used modified Isokorb elements with bent-open rebar inserted into the 300 mm thick wall of the elevator shaft or into the staircase wall in the perpendicular direction,” Brodbeck goes on to describe the custom solution. The ninth and tenth floor cornices were installed in a similar way, where bent-open Isokorb rebar had to be used again owing to the partition-free room layout.

“Completion of a single story took us only two weeks, and then we moved on to the next. All this basically worked like a modular building system with all parts perfectly tailored to each other, and we’ve also been very efficient in terms of time,” Brodbeck concludes. Add to this the fact that even the bathrooms were delivered to the job site as finished modular units, making it possible to incorporate them right away without additional installation effort. The newly built Parkhotel Heilbronn is a prime example of how a state-of-the-art precast design can result in sophisticated architecture while allowing for efficient construction workflows.

The complete version of this article appeared in the BetonBauteile Jahrbuch 2021 available from Bauverlag’s Profil bookstore. 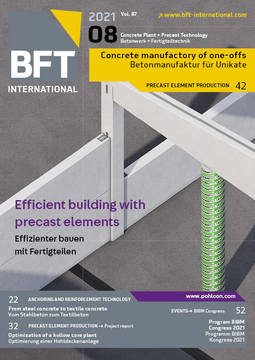 Sächsische Aufbaubank is the central development agency of the German Free State of Saxony. It supports private individuals, businesses, public institutions and associations with loans, grants or...

Schöck Isokorb: The next generation