Sächsische Aufbaubank is the central development agency of the German Free State of Saxony. It supports private individuals, businesses, public institutions and associations with loans, grants or guarantees. About 500 of the approximately 1,000 SAB employees work at the new Leipzig site. The building comprises a gross floor area of 22,500 m² and includes the bank’s administration and public areas.

The forum’s “forest” of columns comprises 159 free-standing architectural-concrete columns. It creates an outdoor space in front of the bank building that is accessible to the public around the clock, which was also the idea behind this design. “The traditional typology of a bank, which is a temple resting on columns as we know it from the last few centuries, should be interpreted differently in this case. The columns do not create a distinct grid and almost hide the building behind them. The development bank should stand for publicity and openness rather than power and money,” explains Heidrun Schuhmann of ACME. The columns are made of high-strength spun concrete and feature mushroom-shaped capitals at their ends that form a ceiling integrating them into the building structure.

The L-shaped building is laid out at an angle on the square plot. It is about 90 m long and up to 32 m wide on both sides. The building wings enclose the square area while at the same time opening up the passageway to the forum. The five-story reinforced-concrete building is accessed via a 6 m high ground floor and also sends a signal of transparency and openness thanks to its glass façade that extends right up to the roof.

Cornice bands extending over a total length of one kilometer

Each floor slab is framed with a cornice facing made of white concrete. The precast cornice elements measuring about 30 × 40 cm were installed over a total length of one kilometer, and the individual pieces were integrated into the building shell and connected via load-bearing thermal insulation elements. In most cases, the Schöck Isokorb XT type K was used; it is suitable for cantilevered balconies and transfers negative moments and positive shear forces. Maximum thermal insulation is provided by an element thickness of 120 mm and the HTE Compact thrust bearing made of high-performance fine-aggregate concrete.

The reinforcing layout of the load-bearing thermal break elements was customized to specific site requirements. informbeton GmbH, a precast producer based in Schwepnitz in the German Free State of Saxony, then incorporated the items into the precast elements in accordance with the structural specifications in terms of number and positioning. The unusual shape of the cornices was a particular challenge for the mold makers when it came to the accurate positioning of the custom forms manufactured specifically for this project, which were specially designed by the application engineers at Schöck. This was because the curved geometry of the façade created areas where the tension bars of adjacent Isokorb elements overlapped. Therefore, one of the bar layers had to be positioned at a lower level compared to its counterpart so that they could run crosswise to each other. Almost all of the 300 precast elements differ in their shape and length. Friedbert Hofmann of informbeton explains: “For the installation of the cornice elements, slab formwork was erected for each floor that generously extended beyond the dimension of the slab edge in order to provide a storage and assembly area. The precast elements, which were lined up flush with each other, also served as slab boundary elements. Overlap joints from the Isokorb tension bars at the slab’s top reinforcement layer provided a secure connection to the building. Then the slab was reinforced and finally filled with cast-in-place concrete.” To protect the cornice elements from soiling and damage during transport, they were literally wrapped like pieces of chocolate candy, with only the connecting Isokorb reinforcement protruding from the element.

The curvature of the floor slab edges differs from floor to floor. Consequently, narrow cornices stretch out to form cantilevered balcony areas. To avoid increased heat dissipation and structural damage such as damp walls or mold growth, these so-called “cold components” must be thermally decoupled from the building. Using Schöck Isokorb elements for structural purposes safely avoids the formation of thermal bridges. The increasingly demanding energy efficiency requirements can thus be met while providing a high degree of architectural flexibility. Friedbert Hofmann summarizes: “It is impossible to imagine the construction industry and the structural design of buildings without the Schöck Isokorb. Any component that is structurally connected to a ‘warm’ building must be fastened with a load-bearing insulation element to avoid thermal bridges.”

In each of the four in-situ concrete stairwells of the SAB building, different types of Schöck Tronsole elements create a sound-insulated connection of the stair landing to the staircase wall. Per each landing, three Tronsole type Z items were installed in the walls of each staircase tower in order to support the landings and acoustically decouple them from the rest of the building. For this purpose, the ironworkers first inserted the type-tested Z Part T load-bearing element into the Tronsole type Z wall element. The landings were then reinforced and filled with concrete. The hand-polished architectural-concrete stairs were delivered from the precast plant and installed individually from above using a crane. The connection to the semi-circular intermediate landings, which were cast in situ, was established monolithically using connecting rebar. The type F Tronsole, in turn, fully decouples the stair flights from the floor slab, thus minimizing the risk of sound transmission at this point as well. The type B Tronsole was used to equip the bases of the stair flights with sound insulation on the first floor. As a result, both the stair flights and the landings are completely decoupled from the staircase walls. 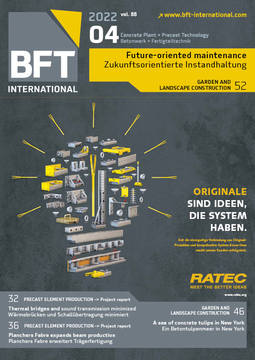 Until 2022, the Bahnstadt residential development will be completed to create the worlds largest array of passive houses on the site of the former Heidelberg cargo station, which is situated...

Schöck Tronsole for sound insulation at the highest level

A three-story complex in the interior court of the Mercure Hotel in Munich, with room for twelve guest rooms, is connected through a walkway to the existing building, where the most important basic...

From gray to green: Redesigning a memorial

With an original height of 38 m, the gray-colored bunker in Hamburgs St. Pauli district is a colossus, a memorial and monument to history, a place for creative people, and one of Hamburgs...