This important bridge project is part of the Alberdi-Pilar bypass section, which includes the construction of seven bridges in total more specifically two long and five short bridges. Added to this are a 39 km long highway and 4.5 km of urban crossing of the town of Pilar.

Execution of these projects will optimize the entry and exit of agricultural products from the different companies in the area to transport them to the waterway through the port of Pilar, especially when the level of the Paraguay River is very low and the other ports are inoperable.

In fact, this route had been one of the most distressing stretches for the inhabitants of the area for decades, mainly during the rainy season and flooding of the rivers that hindered and even paralyzed truck traffic.

The Tocsa-Ecomipa consortium was commissioned with the construction of the bridge over the Tebicuary River. The project received funding from the Financial Fund for the Development of the River Plate Basin (Fonplata), within the “Road Infrastructure Program South-West Integration Corridors of Paraguay”.

This project will benefit a total of 85,000  people from the municipalities of Villa Franca, Mburica, San Juan Bautista del Ñeembuc, Tacuara and Pilar, who will be connected with other regions of the country through this important bridge as well. This project is part of an approximately 90 kilometers long corridor, through which it will save travel time to get from Ñeembuc to the country’‘s capital, benefiting both the producers and the inhabitants of the towns located around this new highway.

From a geographical point of view, the project is located in the Ñeembuc area which covers 35,700  km² and is made up of extensive areas prone to flooding during the rainy season and where a vegetation composed of a wooded savannah and large herbaceous areas predominates. In geological terms, the soils on the route of the road and in the location of the bridge are saturated with water and near rivers, streams and water springs.

The bridge over the Tebicuary River is made up of a reinforced concrete structure. It is 1,175 m long and, 10.5 m wide, being the longest structure in the entire department of Ñeembuc. In total, the bridge has 92 prefabricated pillars on which the cross beams are placed and on top of them the horizontal  beams that are 25 m long and weigh 24 tons each.

Each prefabricated pillar has a different length depending on the type of terrain where they were placed. However, the two standard dimensions that were used were 8 and 10 m long, whose manufacture was carried out by Pretec.

In the assembly phase of the beams on the mainland, which was carried out using the conventional method, the contractor Martek used two telescopic cranes: a Demag AC 100 with a capacity of 100 tons and a Grove GMK 6220 with a capacity of up to 200 tons.

However, for the assembly of the beams on the Tebicuary River, the company also used an 8 x 24 m barge on which the Grove  GMK 6220 crane operated, while the Demag AC 100 crane was used for most of the assembly of the cross beams. After placing the beams, the prefabricated decks were installed using a total of 2,500 m3 of concrete with a compressive strength of 25 MPa.

For the transfer of all the prefabricated structures, the trucks completed a total journey of 375 km from the Capiatá factory to the job site, thus reducing environmental impact and logistics costs thanks to the prefabrication process. 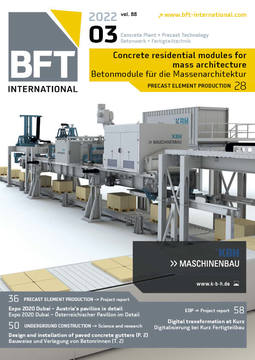 The bridge over the Garzón lagoon was proposed more than two decades ago with the intention to unite the departments of Maldonado and Rocha, located on the south eastern part of the countrys...

Following what could be termed a record-breaking short construction time of only 100 days, the new Hammacher Strasse bridge in Hagen in the German federal state of North Rhine-Westphalia, spanning...

Rehabilitation of a 200-m Rhine bridge with carbon concrete

In 2020, a 200-m bridge, constructed in 1934 over the Rhine River near the city of Albbruck in Germany, was rehabilitated with carbon concrete. In the longitudinal direction of the pedestrian and...

The new bridge of Samborondón  Guayaquil in Ecuador

In this new 780-meter-long road structure, 60,000 vehicles will transit daily, alleviating the growing traffic borne by the two provinces of Samborondón and Guayaquil/Ecuador separated by the Daule...