A ground-breaking idea premiered just two years ago: the mobile battery mold (MBM) developed by Weckenmann, the Swabian equipment manufacturer. The first two of these mobile precast factories have been commissioned recently.

When Weckenmann Anlagentechnik GmbH & Co. KG launched its innovative concept of a mobile mold, some of the company’s customers were greatly interested in this solution. This equipment makes it possible to shift the production of extensive precast panels to where it is really needed: right next to the construction site. This system provides a huge benefit given the continuously evolving global urbanization and the need to construct a large number of apartments to a consistently high quality standard. Precast elements are normally used for this purpose, but it is often impossible to contract stationary precast plants located near the job site, which results in exceedingly long, and thus uneconomical, transport distances, let alone damage to products or delays in their delivery.

Two Singaporean construction contractors that operate independently of each other, Kimly Construction Pte. Ltd. and Tiong Seng Contractors (Pte) Ltd., ordered this product innovation at the end of last year. The first two mobile battery molds supplied by Weckenmann have recently been commissioned simultaneously in the city state.

The Tiong Seng group of companies was founded as early as in 1959 and has since become one of the leading construction contractors in Singapore. During its company history that spans over more than 50 years, Tiong Seng has completed a variety of projects both for the public sector and for private residential developers. In 2012, Tiong Seng commissioned its first automated carousel line for producing precast elements in Singapore. The company is currently using the mobile battery mold for constructing several residential buildings with an average of 22 stories and a total of 1,327 dwelling units.

Kimly Construction Pte. Ltd has also many years of experience in the construction industry; the company has successfully completed various major projects in the city state. Established in 1975, Kimly repeatedly won awards from government agencies and is in possession of all construction licenses required to complete multi-story buildings using both cast-in-place concrete and precast elements.

Accordingly, both mobile battery molds are in service on major residential construction sites located within the city limits. The molds are used to produce solid, 100 to 300 mm thick wall units; they are suitable for manufacturing precast elements measuring up to 3.50 × 7.10 m. A typical battery mold with 20 chambers thus provides a gross mold area of 497 m².

The MBM excelled with its enormous maneuverability, which provided a particularly striking advantage in the densely developed city state of Singapore. The system also remains below the very low permissible noise thresholds specified by the government.

The mobile factory supplied by Weckenmann provides the perfect solution for major temporary construction sites because of its relatively low investment, just-in-time production and enormous flexibility. Its compact design enables a relatively small footprint. Only a few skilled people are needed to assemble or disassemble the system within just a few working days. The production process is equally easy to manage and includes a high-performance compaction unit to compensate for any fluctuations in concrete quality. Optimal utilization of the heat of hydration for the curing process and optional mold heating make the mobile battery mold (MBM) very energy-efficient. Precast elements are of a high quality, which is proven by their exceedingly smooth surface on both sides.

The Singaporean government is massively promoting the use of precast elements with the aim of increasing productivity on the many construction sites operated in the city state. The mobile battery mold has just begun to contribute to this endeavor; according to projections by its manufacturer, this system will influence the future of construction not only in this unique city state but also in the other emerging regions of the world. 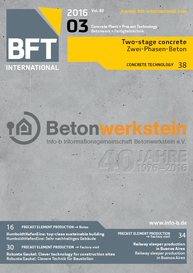 Rapid population growth and the increasing urbanization are some of the main challenges of the 21st century. This calls for more and faster construction of large residential complexes. However, major...

Leading Asian enterprises opt for the concept of battery molds

There is an urgent need for fast construction of large residential complexes all over the world owing to the rapid population growth and increasing urbanization. Since construction processes are...

BGC Precast, belonging to BGC Group and based in Kwinana, Western Australia, has invested in a battery mold from tecnocom, Italy, a company belonging to the PROGRESS GROUP, which is one of the leading...