(10) WO 2013/064246 A2
(22) 3l.l0.2012
(43) 10.05.2013
(71) WOHLSECKER, Wilhelm, Bert-Brecht-Allee 5, 81737 München (DE).
(57) In the previously employed methods for protecting joints of concrete components as dual wall elements or solid wall elements only single-stage joint protection components are used, frequently only as thin sealing strips that are glued to the butt joints from the outside. In this method for a multi-stage joint protection system for wall elements (I, Ia) made of concrete components in the firststage a sealing strip profile (11, lla, llb) is formed directly on the buttjoint...
Find out more in 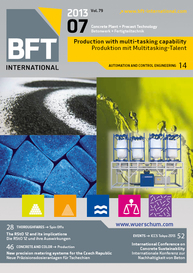 The development partners BPA GmbH (BPA) and Otto Knecht GmbH & Co. KG (Knecht) have developed a solution for the sealing of wall element joints. Since May 2015, BPA has been producing a steel plate...

The InnoElast systems from B.T. innovation GmbH are single-component sealants for universal and varied use inside and outside. Here, the sealant InnoElast Type 2  convinces with its superior...