Unfortunately, graffiti quite rarely appears to be art. Mostly, it is vandalism and provocation through slogans meant to attract attention - and besides using inappropriate places. Spray paints, undercoating, pens and much more can be removed much easier owing to a functional but invisible impregnation. The performance test of the new aqueous anti-graffiti impregnation on the basis of C6 fluoropolymers that was applied to the mineral scumble for concrete was one step in the re-erection project of the Masters‘ Houses in Dessau (Germany) including the associated boundary walls.

It was possible to achieve several objectives simultaneously by designing the concrete skin with a mineral scumble for concrete. Apart from visual corrective maintenance, the objective here was to brighten up the re-erected buildings so as to fit even better into the architectural ensemble. The mineral scumble, moreover, made it possible to retain the characteristic of the concrete and peculiarities of the substrate entirely so that soiling, concrete shrinkage holes and cones simply disappeared. The concrete scumble is not a coating but a demanding surface design requiring several work steps which most often cannot be recognized by ordinary people.

In most cases, the surface appearance desired requires an extensive preparation of the substrate by means of mineral filling compounds. Before applying a scumbling technique, a hydrophobic treatment or a filling compound is applied all over the concrete surfaces, if permissible, in order to obtain uniform absorbency. All these parameters ultimately have an influence on the performance of the anti-graffiti impregnation applied to the scumble.

The graffiti impregnation sofchem Fluorosil FC based on the new C6 technology offered by Scheidel was selected owing to the high alkalinity of the substrate. The impregnating agent is resistant to alkali and thus it is particularly suitable for this purpose. The test area demonstrated that the impregnation is merely visible satisfying one of the important criteria.

The aqueous impregnation made by Scheidel is a mixture of fluoropolymers binding to the substrate in a chemical and physical way. The fluoropolymers have a low surface energy, thus creating a non-stick effect. Graffiti or spray paints respectively can easily be removed from the substrate by means of adjusted cleaners. The anti-graffiti impregnation is resistant to alkali and open to water vapor diffusion providing a Sd value of 0.02 m, hydrophobic and oleophobic. Primarily, the impregnation has been designed for being used at precast concrete factories directly after stripping the formwork, but may also be applied to other mineral, absorbent substrates. Sofchem Fluorosil FC is RAL certified and approved as a permanent protective impregnation, also according to the list of the BASt (German Federal Highway Research Institute).

The test areas provided with the impregnation had been sprinkled and exposed to weather for several weeks. Graffiti sprays as used in the „graffiti scene“ as well as undercoating based on bitumen were applied to the test areas. Various graffiti removers of Scheidel were used for the cleaning tests.

For removing graffiti successfully not only the graffiti remover itself plays a decisive role but also the subsequent cleaning process.

At first, the spray paints dissolved were removed from the test area by means of soft tissues. Because color pigments remained yet at the substrate, Scheidel Coloclean 10, a special dissolver for bitumen, was applied. Afterwards the area was additionally rinsed with water and the post-removal cleaner Powerfluid of Scheidel using a mixing ratio of 1:3.

In the present case, the client asked for an accelerated construction process concerning the coating of the boundary wall using Keim Concretal Lasur. For this reason, the concrete scumble could not react over a period of 21 days and the anti-graffiti impregnation was already applied some days later. Apart from the fact that a thin-layer concrete scumble can be damaged by the stress of mechanical cleaning, the accelerated construction process has a negative impact on the protective impregnation too. Despite these adverse circumstances, the test areas revealed that it is possible to remove graffiti from concrete scumble in a considerate way.

The anti-graffiti protective coating systems available on the market do not achieve a 100% protection in the sense of enabling always an entire removal of spray paints and pens not leaving shades. On the one hand, again and again new, very aggressive pens and spray paints are used in the scene for the removal of the same appropriate methods and means have to be found yet. On the other hand, an impregnation that is totally or almost invisible is not able to perform miracles at problematic substrates. Nevertheless, the test definitely demonstrated that it is possible to obtain a very effective protection by means of impregnation. Finally, the performance was only proven in the large-scale cleaning of a graffiti attack. Anyhow, a certified specialist company should be engaged to do the job.

Unfortunately, it did only take a few days until the first scribbling appeared on the boundary wall surrounding the grounds of the Masters‘ Houses. The wall was as well designed with Keim Concretal scumble for concrete and protected by sofchem Fluorosil FC graffiti impregnation made by Scheidel.

The town administration immediately commissioned the specialist company 3GM - Gassong & Müller GbR based in Dessau-Roßlau - with the removal. They were actively supported by Volker Fröschke, the technical adviser of Scheidel. The fibertip pens could be partly dissolved with the aid of the product C6 Gel graffiti cleaner made by Scheidel and then been simply wiped off. Remains of pigments were removed by means of the water emulsifiable special dissolver Scheidel Cococlean 10 using a soft brush. After the completion of the cleaning process, the area affected was carefully rewashed with a hot water high-pressure cleaner.

The fact that the anti-graffiti impregnation can be applied at the factory provides several advantages. For one thing, the concrete elements are protected against soiling during transportation and moreover graffiti attacks at an early stage can be removed easily at the construction site before they are delivered to the client. The impregnating agents of Scheidel with a permanent anti-graffiti effect are suitable for all requirements imposed on concrete surfaces in the range of architectural concrete classes SB 1 to SB 4. The surfaces feature excellent water-repellent properties and clearly show a drop-repellent effect. Scheidel sofchem Fluorosil FC is merely visible, thus being particularly suitable for architectural concrete.

Furthermore, the permanent anti-graffiti impregnation has been more and more used for city furniture made of concrete, for example, at the State Garden Show in Bamberg. 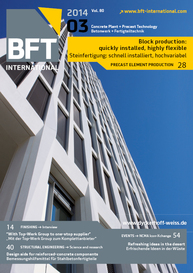 Everything against graffiti from a one-stop supplier

Within the framework of a research project of the Central Innovations Program for Small and Medium-sized Enterprises (ZIM) of the Federal Ministry for Economic Affairs and Energy (BMWi), Scheidel...

more
Issue 2015-02 Multifunctional impregnation of façades, bridges and other surfaces

In cities and local communities, unwanted graffiti on façades, bridges and other surfaces has become a major nuisance whose removal is posing big challenges to local authorities and property owners....

In reality, concrete and concrete surfaces are subject to a large number of influences that lead to technical, functional or visual deterioration of precast elements or concrete products. These...