The building at Grosse Bergstrasse is the first multi-story, inner-city IKEA store in Hamburg-Altona. IKEA considers this store to be a pilot project. Concreting works related to the building shell were carried out from November 2012 to July 2013; subsequent structural steel works were completed in January 2014. The store was opened after completion of the final parking deck and ramp coatings in June 2014.

The new building has a gross floor area of about 43,000 m² (excluding parking levels and ramp system). The actual store occupies an area of... 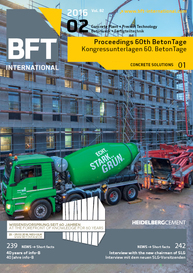 The urban grounds on Stresemannstraße in Hamburgs Altona district had led an extremely sad existence for a long time. Until International Campus AG decided to create living space for young people...

Carbon-reinforced concrete is a composite material that has been studied extensively since 2014 within the landmark C³  Carbon Concrete Composite research project [1] funded by the Federal...

The RappAutarkPlusHaus system is a state-of-the-art building system whose envelope meets the requirements of the German passive house standard. This system relies on industrial production, consumes...

A large residential and commercial building, completed a few months ago, now stands on the Aesculap-Platz in Tuttlingen, Germany. For the floors and walls, the builder had chosen precast elements from...

A so-called timber-concrete composite floor is a composite structure consisting of timber beams or panels and a concrete slab. These hybrid elements combine the properties of the two construction...