Unico is an efficient manufacturing system for the production of monolithic manhole base sections with variable channels and connections used in casting or immediate demolding processes, which is manufactured and marketed by Wagener & Polascheck located in Leopoldshöhe (Germany). It consists of the milling center for processing the polystyrene blocks as well as the manhole configuration software.

The Colle Topmilling 120 is a milling center for the negative channel made of polystyrene used for manhole bases with nominal widths of DN 800, DN 1,000 and DN 1,200 as well as for negative connections with nominal widths from DN 100 to DN 600. Milling tool control by CNC software and CAD-CAM is used to control the milling center. Three-dimensional drawings are even possible in both ways. The milling tool is a five-axis column milling machine equipped with a swiveling cross table in front of it, which is furnished with vacuum clamping devices allowing various dimensions. One of the clamping devices can be swiveled. The system works fully automatically as specified by the respective operations scheduling. The milling machine is furnished with a polystyrene exhaust system ensuring a nearly entire extraction of the milling chippings during the machining operation. In addition, it is completely covered, which means that it can be installed at any place. Furthermore, supplementary equipment is available for DN 1,500 in order to mill a polystyrene negative channel of DN 1,500, which can be extended to up to five solid axes for the production of channel heights of up to 1,000 mm. The manhole configuration software allows generating a manhole base section according to customer specifications. The software creates the respective drawings for the channel, the connections and for the complete manhole base section.

Any individual channel design is easily possible with the aid of a milling machine. Thus, for instance, negatives may be manufactured with or without integrally molded berm. Upon request, it is also possible to provide faces and drillings directly in the zone of the connections. This makes positioning of connections easier and a minor wall thickness possible.

The finished negative channel together with the fixed connections is inserted in a concrete manhole machine and filled with concrete. After hardening, the manhole base is demolded, turned and the negative models are removed, in order to be used again as required.

The finished negative channel with fixed connections is inserted in a semi or fully automated manufacturing plant, filled and immediately demolded by means of a special supporting system, turned after hardening and then the negative models are removed. The negatives may be reused as required.

Immediate demolding in a turning process

Wagener & Polaschek supplies a special release agents or release films in order to optimize the surface and to facilitate demolding of the negative models. These, as well as the negative models, can be disposed of without affecting the environment with pollutants. Depending on the special requirements, a combination of release agent and release film is also possible in order to obtain a particular surface structure.

A special plug-in system used for the connections provides for precise and fast mounting and dismounting of all connection elements. The polystyrene negative channels are removed from the hardened manhole with the aid of an extractor, which even makes it possible to reuse the negatives. 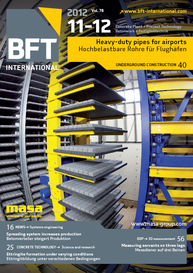 The BFS-solution for the production of monolithic concrete manhole bases

Concrete manhole bases on a par with clinker lining

In several tests, the IKT - Institute for Underground Infrastructure has proven that the monolithic manhole base made of acid-resistant high-performance concrete from the Betonwerk Bieren concrete...

Styrofoam Channels are suitable for Repeated Use

By developing the Capitan system BFS Betonfertigteilesysteme GmbH has succeeded in designing a customer-friendly plant solution. Owing to the modular design of the system the user has the chance to...

Among other items, the range offered by the company includes products for road construction and other landscaping-related purposes, special blocks and fences, filigree floor slabs and precast stairs....

The Capitan system used enables low-wear production whilst reducing the time needed for the manufacturing process to minimum. A trend-setting instrument is created for the construction of underwater...