A recent plant tour of our editorial office ended with a look into a modern showroom. Through virtual reality goggles, the editors were able to look at the finished product of the plant, a comfortable single-family home erected with precast elements. Before that, the tour through actual production had presented a quite different picture, the familiar one: production lines made of steel, the workers in-between in their garb as they lifted up the magnets for positioning the formwork, or as they hunched down on the form table, manually placing the embedded parts. The contrast between the two images in one and the same plant apparently couldn’t be greater.

To keep the virtual-reality goggles from quickly being exposed as a marketing hoax, digitalization could ­actually be introduced to the production sectors as well – only, of course, where it makes sense – for example, in training and further education of specialized workers.

In this context, the BetonQuali project of the Basic and Further Training Organization for the Concrete and Precast Industry (BBF) in Germany (see p. 88) is more than welcome. The fact that the BBF will offer a digital training program – supplemented, it goes without saying, by the requisite classroom teaching – for further training of low-skilled workers and for preparing them for their examination as process mechanics. Since the offer is digital, all who are interested can learn flexibly on their own time, almost independent of the requirements of production in the plant. Such an offer in workplace modernization could be a first step towards contributing to making workplaces in production once more attractive for entrants. 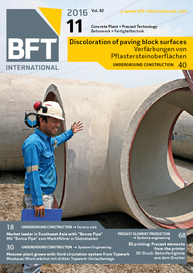 Virtual reality (VR) considers only digital information in a virtual environment. Hence, VR is a tool for planning in a phase when there is not yet a reality. In augmented reality (AR) digital...

Future potentials for the precast industry

To what extent has the concept of Industrie 4.0 already found its way into the precast industry? And what are its possibilities available to operators of precast plants, mechanical engineering and...

From semi-skilled to skilled worker

Shortage of skilled workers and digitalization are two of the trends that will present the working world with enormous challenges. These are precisely the two issues addressed by the German Federal...

The master craftsman course at Ferdinand-von-Steinbeis School in Ulm

If training and qualification is necessary, then made-to-measure. At the Education and Training Center for the Construction Trades in Kreuztal-Fellinghausen, Germany, employees of precast concrete...