Having been active in precast concrete production for numerous decades, Dutch company Voorbij Prefab opted for an extensive modernization of its pallet circulation system. The goal was to optimize and fully automate production processes and to increase production rates while at the same time focusing on the finished product, and thus on the end user. In the Progress Group, Voorbij Prefab found a partner who assisted in modernizing the fleet of machinery, integrating robot technology and implementing a comprehensive software solution. The results are quite impressive.

Voorbij Prefab, today one of the most modern precast concrete producers throughout Europe, is looking back on a long corporate history. Founded in 1935, the Dutch company soon switched from producing wooden piles and steel reinforcement for the construction industry to manufacturing precast concrete elements. In 1996, the family business became part of TBI Holdings, one of the largest real estate, construction and technology groups throughout the Netherlands.

Nevertheless, the company encountered increasing difficulties in remaining profitable. “Our portfolio was too broad, delivery times long, and our customers were increasingly less satisfied,” says Jos Mulkens, CEO. During those years, Voorbij Prefab supplied a multitude of companies in different segments of the construction industry, producing precast concrete elements for housing, commercial and industrial construction, for tunnels, bridges and noise barriers. The number of staff came to 180.

The decision was clear: a shift was required, and Voorbij Prefab was to undergo a radical proc-ess of modernization. The goal was to automate and optimize production processes, integrate software and increase production rates while at the same time focusing on the finished product, and thus on the customer.

In the future, production was to be limited to concrete elements for housing construction – just-in-time, competitively priced, and in customizable design. The goal was to fully automate production and to perfectly coordinate all processes from preparation and planning all the way to logistics and manufacture. To achieve all of this, the company was looking for a partner who would be able to realize the necessary conversion and restructuring measures as a turnkey solution.

The Progress Group was eventually commissioned to develop, in cooperation with Voorbij Prefab, the technical solutions needed to modernize and optimize the production plant. The two companies had already cooperated in the past: in 2003, the existing carrousel plant had been designed and installed by the two sister companies, Ebawe Anlagentechnik and Progress Maschinen & Automation.

Prior to restructuring, all plants needed to be operated manually and independently; the shutters were produced from wood in a manual proc-ess; throughput in production was extremely low due to the non-standardized precast concrete elements. As part of the intended modernization proc-ess, the existing technology was examined in detail and checked in terms of its potential for optimization. The goal to quadruple hourly production rates could only be achieved by the use of robot technology, modernization of the existing machinery and comprehensive data networking.

Modernization of the plant was focused on four priorities: installing a new robot to fully automate shuttering and deshuttering; integrating mesh production into the carrousel system; optimizing the entire carrousel plant including control unit; and implementing ebos, a software solution offered by the Progress Group.

At the end of the production process, the pallet is scanned, the shutters are unlocked, removed and fed into the cleaning system. The cycle is completed with returning the shutters to their storage locations. This not only increases the precision of both shuttering and deshuttering but also allows compliance with specific lead times. The numbers are speaking a clear language: the time needed to prepare a shutter has been reduced to a mere 6 minutes.

Efficiency is additionally ensured by Infinity Line, a shuttering system developed and patented by the Progress Group. At Voorbij Prefab, it has for the first time been used in combination with solid wall shutters. Infinity Line enables gapless shuttering without the use of polystyrene elements while at the same time minimizing the number of shutters required. This not only simplifies and reduces the cost of shuttering but also improves the quality of the precast concrete elements: omitting the use of polystyrene elements enables perfect outer edges to be produced.

The restructuring measures also included the production of steel reinforcement. In mesh production, the focus rested on optimizing steel preparation. The straightening machine of type MSR used for this purpose was modified and equipped with an additional decoiler, and the transport system passing the material to the M-System mesh welding unit was optimized.

The actual mesh welding unit and the magnet beam were repositioned. In cooperation with the magnet beam, which deposits the reinforcement mesh on the pallets in an automated process, a stacker lift truck now allows smooth transport of the mesh not suitable for automated loading to the manual loading stations. In addition, a completely new software system was installed. These interventions enabled the capacity of the reinforcement plant to be increased while at the same time optimizing the flow of production by fully coordinating the different manufacturing steps.

The special analysis features offered by ebos are a major contributor to enabling planning and ensuring transparency of the overall production process. CAD data can be checked for their manufacturability even prior to production, for example, by means of a PTS test (“Production Test Service”). Production optimization is also possible using this tool. Another feature called GPA (“Graphical Performance Analyzer”) offers the possibility to play back and investigate the entire process sequence at a later date. Bottlenecks and opportunities for optimization thus become obvious at a single glance. Offering these and other tools, ebos supports an increase in productivity while at the same time assisting in identifying deficiencies, weak points and unnecessary costs.

the road to success

Thanks to the successfully completed modernization of the carrousel plant, Voorbij Prefab is today one of the most modern precast producers throughout Europe. “We have moved a manufacturing company right into the center of today’s digital world,” says CEO Jos Mulkens, expressing satisfaction. The comprehensive reorganization was accompanied by a shift in the company’s way of thinking.

The restructuring process was completed within a time span of just a few months. Whereas previously, the company produced precast concrete elements for 200 houses per year, the production rate has now increased tenfold to 2,000 houses, and the time frame from designing the elements to the start of production has been reduced from five weeks to five days. Altogether, Voorbij Prefab now employs a staff of 40, and of these only twelve in production.

The company’s current success testifies to the fact that the modernization effort has paid off. Voorbij Prefab not only supplies building companies with precast concrete elements for housing construction but is now also building directly for its customers, its marketing philosophy being a logical continuation of the fully automated and networked production process.

With the “1-2-3 casco” – loosely translated as “1-2-3 shell” – concept, Voorbij Prefab is putting service and the customer first. The precast concrete elements are flexible in design, enabling changes to be made until immediately prior to the start of production, and a delivery time of six days is guaranteed. Everything has been geared to “turning the construction industry upside down”, as the company emphasizes.

TBI Holdings, the parent company of Voorbij Prefab, has additionally launched an initiative called “lekkerEIGENhuis” (“beautiful home of your own”). The initiative aims at making it as easy as possible for customers to build their own home. The related web portal offers a configuration tool which can be used to plan one’s dream home in every detail and calculate its price, all in just a few clicks. It offers a choice of 15 different types of houses with different numbers of floors and different roof shapes. Planning is possible right down to the smallest detail, such as positioning the windows and staircases or choosing floors and sanitary facilities. 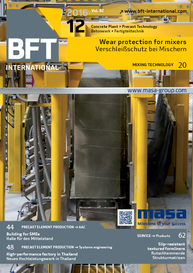 An efficient shuttering system, often together with a shuttering and deshuttering robot, is the core component of a highly automated precast concrete plant. If the system is well conceived and the...

The continuous further development of the machine fleet and the use of modern technology are essential for the success of any manufacturing company. The precast concrete industry isnt any exception...

Verhelst Prefab and Progress Maschinen & Automation have been working together successfully for over 20 years. Since 2011, in particular the Belgian precast concrete element manufacturer has been...