In response to an inquiry from the Kuwaiti company Bonyan United, Contec developed a general concept for the delivery and installation of a fully-automatic and universal stationary block plant for the production of pavers, curbstones, hollow blocks, and a variety of other products. The major challenge was to fit the plant into the much too small site. In addition, the existing plant had to remain in operation until commissioning of the new production facility, without causing major disturbances.

After inspecting a number of production facilities, the client decided finally on a used Schlosser SV 30 block machine with curing racks, feeding bucket plant, a new mixing plant, including aggregate storage and batching plant, as well as cement and color dosing.

Dismantling of the block machine, including, the feeding bucket system, took place at Lithon Plus in Niedernberg/Germany. All components of the block machine have been  subject to major overhaul and adopted to the new concept already in Germany. For that purpose, the block machine was dismantled, checked and fitted with new parts, where required, before being reassembled.

The entire control system was converted from Philips to Siemens Simatic S7, and a new software developed.

Contec completely designed the new batching and mixing plant, which now consists of aggregate batching and a mobile weighing scale, two cement silos with cement screw feeders, and the cement weighing scales. The system is completed by a 4-color batching plant for powder color as well as two planetary mixer for face and core mix, make Sicoma.

Transportation of the plant by sea

The completely overhauled block plant, together with curing racks and the complete batching and mixing plant were loaded for shipping into containers and shipped to Kuwait.

Contec began with the installation of the block plant and the curing rack transporter system with a capacity of approx. 3,000 pallets immediately after the client had completed the foundations. To ensure quick support also after commissioning of the plant, Contec installed an electronic remote control system. 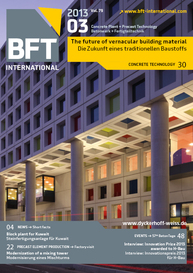 The well-known concrete block producer on the Kuwaiti market, MS Bonyan is operating several concrete block plants. Thereof a SP 2000 plant delivered through Schlosser Company of Germany and a fully...

Symposium in the Emslandian city of Spelle was well attended

The positive feedback on the event already in the time leading up to the 60th company anniversary was tremendous: The Managing Director Norbert Foppe, who together with his wife Annette controls the...

Modernization of a mixing tower

Koll GmbH & Co. has been manufacturing concrete gar­den and landscaping products in Bonn-Beuel for over 30 years. In order to be able to meet the requirements of its customers and to develop new...

Elkon, producer of concrete mixers, batching plants and block making machines amongst other equipment for the concrete industry, has announced its highlights of 2018. In December 2018, besides a...