In the course of a large-scale hydro energy project of the Spanish Iberdrola energy company, three dams will be built around the Tâmega River in Portugal; after putting into service, they will generate 1,760 gigawatt hours of electricity for the Iberian market. About 242,000 m³ of concrete will be required for the dam wall planned in Daivões alone, with a height of 78 m and a length of 265 m.

Talleres Alquezar S.A., a Spanish company for construction projects with more than 60 years of industry expertise in design and manufacture of aggregates plants, concrete plants and mortar plants, is the project partner for this dam. Alquezar has been operating a modular plant for the production of hydro dam concrete with a total volume of 400,000 m³ in Daivões since 2017.

After completion, the dam in Daivões will have a capacity to retain up to 56.2 hm³ of water. Accordingly, the requirements on the quality of the concrete are high here. The composition and processing of the concrete have to meet very specific criteria, in order to avoid the formation of cracks in the hydro dam concrete later on. The low water content of the hydro dam concrete and the very coarse aggregates with grain sizes of up to 150 mm are particularly challenging for agitator and drive.

Moreover, very large quantities of aggregates have to be processed for a total volume of 400,000 m³. Therefore, the design, configuration and installation of the plant in Daivões was a very special task for Alquezar.

If concrete mix designs feature a high viscosity like the one in Daivões, drive system and agitator have to be particularly powerful. According to the manufacturer, for José Antonio Chaure, general manager of Alquezar, there was no doubt that only the BHS twin-shaft batch mixer could guarantee the required concrete quality: “Owing to the large grain size of the aggregates used in this project, we knew right away that no other mixer was an option for the production of the hydro dam concrete. When taking a decision in favor of the twin-shaft batch mixer, we could rely on our only positive experience with BHS and allay the customer’s doubts.”

Two twin-shaft batch mixers of type DKX 4.5 with a capacity of 4.5 m³ each have been integrated in the modular plant since 2017. The decision to rely on the twin-shaft batch mixer is regarded only positively by plant expert Chaure, stating: “In Daivões we once again experienced that the BHS machines achieve an extraordinarily high mixture homogeneity. In addition, waste was reduced to almost zero in this major project. In this way, we not only were able to demonstrate the totally reliable technology of the twin-shaft mixer to the customer, but even could exceed the high demands on the concrete.” Alquezar is operating two production lines in parallel, so as to simultaneously ensure a large production volume and operational safety of the plant running at a capacity of 250 m³/h. Apart from the efficiency, the compact design of the high-quality BHS mixers has proven its worth.

Furthermore, the long service life of the mixers has proven to be another great advantage that increases the efficiency of the project significantly: The plant could be taken over from a previous project almost identically, only adapted with a minimum of effort. In 2010, also in Portugal, the Foz Tua dam was built about 50 km away from the current project, imposing similar requirements on the concrete. For general manager Chaure, the BHS machine also scored in terms of maintenance and transport: “After carrying out short maintenance works, the plant could still be used for the new project without any problems. There was no need to replace any parts, not even the gear unit.”

The company history of Alquezar is closely intertwined with BHS Sonthofen: The company has already been working with BHS successfully for more than 30 years. In particular, for challenging mixing tasks and if a high concrete quality is demanded, Alquezar regularly relies on machines made by BHS. The formula for success has turned out to be true in this project again. Not only the great efficiency of the twin-shaft batch mixer, but also the service standard of BHS contributed to the smooth development of the major project in Portugal.

Therefore, the Spanish machinery and plant manufacturer positively looks forward to the cooperation in future: “The cooperation with BHS-Sonthofen is consistently successful. Accordingly, we will take the technology into account for future projects, too.” 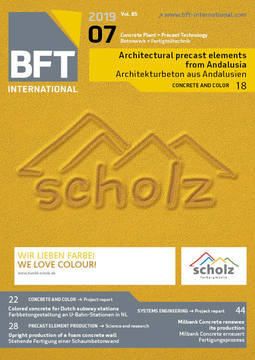 The enclosure dam between the Wadden Sea and the Ijsselmeer has protected large parts of the Netherlands against flooding since 1932. Meanwhile, the building structure is in need of refurbishment and...

Concrete used in the construction of dams has to meet the most stringent requirements: it must withstand immense water pressure while at the same time being flexible enough to defy natural disasters. Producing concrete of this class requires high-quality

Concrete mixers from Bavaria on the roof of the world

Six twin-shaft batch mixers of type DKX 6.0 delivered by BHS-Sonthofen are producing the concrete needed to build the main embankment of the Dagu hydro dam undergoing construction near the Tibetan...