For a special type of structure, an additional Liebherr mixing plant at WEC-Turmbau in Magdeburg (Germany) produces quality concrete for prefabricated tower elements in wind energy systems. The idea behind making these tower segments out of cement did not occur until 1999. Prior to that, these components with exacting standards in terms of design and load bearing were made from steel. Production of the tower segments using concrete has now reached a level of technical refinement in series production and has proven to be cost-effective and economical. Reinforced concrete, complex armouring and special moulds with very tight tolerances are the prerequisite for the manufacture of these segments.

The prefabricated concrete towers in wind energy systems are often more than 100 metres high and comprise over 20 different segments. The segments with a large diameter are made using two or three half-moulds to assure trouble-free transportation to the assembly sites of the wind energy systems. WEC-Turmbau in Magdeburg mixes 120,000 m³ of concrete every year.

For the series production of segments for prefabricated concrete towers, the concrete is made to precise mixture specifications and added according to a precise schedule. In Magdeburg, the choice was made for a Betomat III-570 type Liebherr mixing plant. 570 stands for the effective volume of aggregate in m³, which is stored in seven compartments in the silo above the system. The aggregate is conveyed via a bucket elevator and rotary distributor at a delivery rate of 140 m³/h. The storage volume of the four possible types of cement is 360 m³.

The core of the system is a Liebherr RIM 3.0 D ring pan mixer with a mixing performance of approx. 120 m³/h. This intensive mixer is equipped with a mechanical dual agitating system and therefore achieves the best mixing results in the shortest of times.  The link between the mixing system and the production building is provided by a bucket conveyor, which supplies the fresh concrete at just the right time to the correct mould in the production building. Alternatively, truck mixers can also be filled.

The quality of the mixed product is influenced in a large way by the integrated control, measuring and regulating systems. The Liebherr-patented Litronic-FMS moisture measuring system with integrated microprocessor detects the humidity level in the compartments for sand and grain/gravel from 2 to 8 mm. Up to 16 sensors located directly at the silo outlet on a baffle plate can be connected to the evaluation electronics. Based on the calculated humidity levels, the mixture specifications for the current load are adjusted accordingly via the Litronic-MPS II system and weighed precisely on the scales. For mixture preparations in which correction by means of humidity measurement is not sufficient, the consistency can be regulated by mixer sensors.

The Litronic microprocessor control system is enhanced by electronically controlled Litronic-BMS requirement indication points from Liebherr, via which the required quantity and type of concrete can be requested and released from the respective production area. The exhaust air filters in the cement silos and mixers make a positive contribution towards environmental protection. 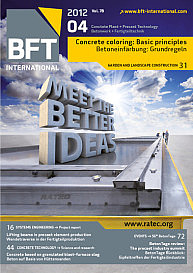 A Liebherr Betomat V 1010 mixing tower has recently been commissioned at Alfons Greten GmbH & Co. KG in Essen/Oldenburg, Germany. Featuring a diameter of 10.5 m and an overall height of 32 m, the...

The Max Bögl Group of Companies acquired a new Liebherr mixing tower for production in Osterrönfeld, Germany. An inauguration party celebrated commencement of operations on 16th of July, 2014 for...

For many years now, the Max Bögl group of companies headquartered in Sengenthal has been a competent and reliable partner when it comes to the production of tunnel segments of high quality. The...