The well-known manufacturer of paving block systems commissioned Teka with the modernization of its mixing plant and to supplement it with a high-performance Teka planetary mixer for processing face-mix and/or colored concrete. In addition, storage, batching and delivery of aggregates was to be extended and made more efficient.

In the spring of this year, Teka delivered two silo groups with six aggregate bins each, i.e. a total of twelve compartments. The manufacturer of concrete blocks pebüso is thus able to store up to twelve different types of aggregate. The concrete plant is located directly on the Dortmund-Ems Canal and can therefore obtain all raw materials via this waterway. All of the twelve aggregate bins are filled by crane directly from the freight room of the ship.

The two weigh belts located below the aggregate silos are used for precise weighing and for transport. Both weigh belts serve a Teka feed system with tipping bucket. The feed amount was here so chosen that not only the new Teka face-concrete mixer can be served without any problem, but the core-concrete mixer as well. The drive unit of the feed system is provided with a generously designed service platform to ensure optimal access for maintenance purposes. The feed bucket discharges into a buffer silo above a branch belt on which the aggregate is transported to the two mixers via two-way valve distribution.

The face-concrete mixer chosen is a type TPZ 750 Teka planetary mixer with a maximum concrete discharge of 0.5 m3 per batch. This mixer features a unique mixing turbine that has already been in use for some time by major concrete manufacturers and for which a patent has been applied. The standard delivery scope comprises also a frequency converter for the main drive so that the torque of the mixing turbine and the torque of the additional mixing arms can be optimally adjusted to the mix.

Different torques can be chosen also during a mixing cycle, e.g. during the filling process, during dry and wet mixing and during discharge. The special centrifugal force in the mix makes the mixing turbine particularly suitable for processing face- and/or colored concretes as well as any kind of special concretes that may be required for special products. The high degree of dispersion of the mix components makes the mixing turbine also suitable for processing reduced quantities and, accordingly, also concrete for products of very high quality. The mixing turbine is primarily used in models TPZ 375 to TPZ 1125 of the Teka line of planetary mixers. However, the turbine can also be installed in models TPZ 1500 and TPZ 1875 as an alternative to the mixing star.

The high expectations pebüso had placed in the new plants were completely fulfilled. The mixing plant operates in three shifts, almost around the clock, 24 hours a day, 7 days a week – without problem! With the modernization of the mixing plant in the concrete plant in Münster/Germany, the machine builder Teka Maschinenbau has once again impressively emphasized that it is one of the leading contact partners for high-quality and customized modernization and conversion tasks to existing concrete mixing plants.

Drawing on the experience of 50 years, optimal solutions are found in close colla­boration with the customer, from planning to commissioning and, ­finally, after-sales service.¢ 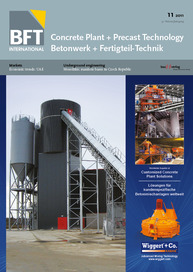 Ehl AG is a company in the construction materials sector committed to sustainable production of concrete elements. Founded in 1976, Ehl is now a member of the CRH Group and with 28 locations and with...