The move is scheduled for the beginning of the year 2012. The minister for economic affairs, Dr. Rainer Haseloff, called it a great success for the economic location Saxony-Anhalt. In Karsdorf Lafarge run one of their largest and most modern cement plants in ­Central ­Europe. The 250 employees make up to 2.3 million tons of cement per year. Karsdorf is the largest of three locations in ­Germany where altogether 3.5 million tons of cement are produced. Lafarge took over the Karsdorf works after the reunification and has invested about € 180 millions in streamlining. 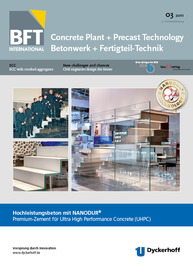 With the official completion of the transaction with Lafarge and Holcim, Lafarge Deutschland is member of the CRH Group with immediate effect. At the same time, the name Lafarge has been replaced in...

Relocation of the companys corporate headquarters

The specialty chemicals group Lanxess has moved its headquarters from Leverkusen to Cologne. Lanxess has been controlling its global business officially from the German city on the Rhine River since...

From now on, the customers of the building materials supplier, Lafarge, also have in Germany the possibility to place their orders around the clock. For this purpose, the corporate group establishes a...

The plant engineering company Weckenmann GmbH & Co. KG, based in the German federal state of Baden-Wurttemberg, is investing around 3.2 million euros in the extension of its location in Saxony-Anhalt,...

Change in the Management in Germany

As of August 01, 2012, Danilo Buscaglia took the lead of Lafarges management in Germany. Thus, he became successor of Ulrich Aumüller, who will perform new activities within the Lafarge Group after...