With careful planning, the concrete plant of Thomas Beton, Lürschau was successfully modernized during ongoing operations. An Ammann Elba CBS 120 SB concrete mixing plant was connected to an on-site aggregate linear bin as the new heart of the plant.

“All I can say is: Drive quickly under it!“ When the first 300 m3 were mixed during the commissioning of the new Ammann Elba CBS 120 SB,

B. Rainer Brings, Managing Director of Thomas Beton was impressed by the speed of the plant. With this new concrete mixing plant, he can now significantly increase his hourly output compared to the old one. Up to 120 m3/h are now possible.

This increase in output was urgently needed. This was because the demand for fresh concrete had increased significantly due to large foundations for regional wind power plants and a nearby precast plant, among other things. The old plant had reached the limits of its capacity.

Interruption was not an Option

Two challenges had to be mastered during this modernization. On the one hand, the existing dosing construction had to be technically integrated into the new construction across the height difference of an escarpment. On the other hand, the plant had to continue production during the modification in order to be able to serve the current orders.

After the stock had been checked, it was determined in detail which components could be replaced and which could continue to be used. “We now operate twelve Ammann Elba ready-mixed concrete plants of this type in our factories in northern Germany“, says Brings. “When planning the new plant together with Ammann Elba, we were able to make perfect use of the flexibility of the assemblies.“

The modernization of the site during ongoing operations took only eight weeks. While the old mixing tower continued to do its job, the new ready-mix concrete mixing plant CBS 120 SB with single-shaft mixer CEM 2660 S was connected to the existing aggregate linear bin as a belt conveyor plant.

The complete locking and dosing technology of the on-site linear bin itself was renewed. A technical masterpiece was the threading of the new 35-metre-long weighing belt into the concrete linear bin. This challenge was successfully solved thanks to the many years of experience of the Ammann Elba dealer Proschwitz GmbH, Trittau, which was also responsible for the overall assembly.

The discharge gates are actuated via compressed air by an integrated screw compressor. The weighed aggregates are finally conveyed directly into the pre-hopper of the mixing plant via a conveyor belt. A sand moisture measuring device below the dosing gate continuously measures the material moisture.

The cement is stored in six cement silos, each with a capacity of 100 tonnes. High-performance cement screws EZL 80/100 are used for dosing in the generously dimensioned cement weigher.

B. Rainer Brings is «completely satisfied with the result. The new ready-mixed concrete plant is an efficient and also a visual jewel. „He is also convinced by the uniformly stable and high quality of the concrete. Both a dedusting filter system and a mixer cleaning system are integrated in the CBS 120 SB. This prevents contamination. The winter cladding LL 60, which encases the entire mixing plant, also protects against temperature fluctuations caused by the weather.

“From planning to transport and installation, Ammann Elba demonstrated a high level of detailed work,“ says the Managing Director, summing up the positive conclusion of the modernization of his plant. “And since our team knows the Ammann Elba plants very well, we were also able to continue production seamlessly.“ 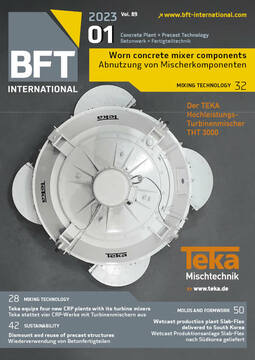 The new concrete mixing plant from Amman at Betonwerk Sprenger has been in operation for only a few weeks  and its performance impresses its operators already now: High efficiency, high concrete...

Ehl AG is a company in the construction materials sector committed to sustainable production of concrete elements. Founded in 1976, Ehl is now a member of the CRH Group and with 28 locations and with...

Modernization of a mixing tower

Koll GmbH & Co. has been manufacturing concrete gar­den and landscaping products in Bonn-Beuel for over 30 years. In order to be able to meet the requirements of its customers and to develop new...

New Options for the Modernization of Mixing Systems