Sub-Saharan Africa is becoming increasingly important for companies in the international cement and concrete industry and its supplier companies. The demand for construction services in the 49 countries south of the Sahara Desert, with a population totaling more than 850 million, has consistently grown in recent years.

One of the locomotives of economic growth in the region is South Africa, with growth rates of more than 5  % in the run-up to the FIFA World Cup 2010 for which, in addition to the stadiums, transportation facilities and many residential and office buildings were erected. In 2013, the economy in that country is expected to grow by 3.4 %. And in other countries of the continent, all signs point to growth as well. For Nigeria, the International Monetary Fund (IWF) expects a growth rate of 7 % for the entire year of 2013, and for Ethiopia, 5.5 %.

The countries of the northern hemisphere naturally want to profit from this boom as well. They support the governments in the Sub-Saharan region in developing the local cement and concrete industry, including organization of well-functioning, modern quality control for construction products – support expected to pay off for the helpers in the long term. If the African countries adapt and accept European test standards, they will also use European products and machines.

One of the world’s foremost trade shows for the construction industry will also be held for the first time in Johannesburg, from 18 to 20 September. The organizers, Messe München International, will export its trade show hit to another growth market, after China and India. That, too, attests to growing interest in Sub-Saharan Africa. 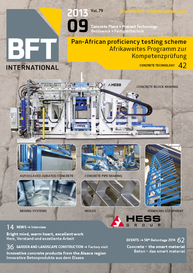