The narrow underpass in Östingstraße had long been a thorn in the flesh of the authorities of the city of Hamm. In the absence of a separate path, pedestrians and cyclists were exposed to great risks when passing through this narrow section of road. For this reason, the design engineers opted for the construction of a pedestrian and cyclist underpass crossing under the single-track railway line. Instead of demolishing and widening the old bridge with its truss steel superstructure and massive foundations, the railway design engineers favored the construction of a separate underpass for pedestrian and cyclist traffic only right next to the existing bridge.

To enable the construction project to be implemented over a single weekend, the design engineers of DB Netz AG quite consciously opted for the use of precast concrete elements.

The operation was carried out in several steps: following the removal of a part of the track bed, excavators were used to dig out the soil. In the next step, a 500-t mobile crane positioned 14 precast elements, each of which weighed up to 34 tons. “This was a huge logistical feat”, says Marc Weißgräber of Ettlingen-based contractor B-H-Bau GmbH who completed the project for DB Netz AG. “Because of the narrow time frame of only 65 hours, one heavy truck after the other arrived on site to deliver precast elements from manufacturer Kleihues who is based in Emsbüren.”

Assembly of the box segments manufactured in the match casting method proceeded smoothly thanks to the excellent collaboration with the Kleihues assemblers. After placing, the segments were bonded with epoxy resin, tensed against each other and installed in the final state firmly fixed. “This construction method offered the great advantage that immediately after the installation of the precast elements, we could start backfilling and placing the tracks again,” Weißgräber says. 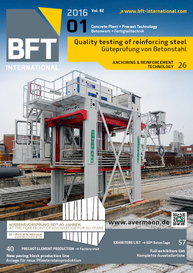 The station in the Swiss town of Thayngen is part of the railroad line from Zurich to Stuttgart. The European Union has classified this route as a Trans-European Network line or TEN line. In order to...

The rehabilitation of railway bridges is generally focusing on one central objective: In order to reduce disruptions of the rail traffic to a minimum, the line closures, during which the rail traffic...

Precast elements are a perfect match for architectural-landmark retaining walls

In most cases, construction with precast concrete elements is primarily focusing on the aspect of function. Stability, impermeability and a long service life are the factors that planners obviously...

Where underpasses under rail lines must be constructed or renewed, developers as a rule, aim to reduce track possession to a minimum. These are the times during which rail traffic must be blocked, and...