Some months ago, the European Union filed a complaint against the Federal Republic of Germany by charging that Germany had violated the Construction Products Regulations (BauPVO), imposed additional stipulations required for construction products to obtain effective access to the German market, and thereby impeded the free movement of goods within the EU. The bone of contention: the lists of German Construction Rules (Bauregellisten) and the Ü mark with which Germany until now imposes additional requirements on certain products for which, according to German standpoints, essential quality requirements were not included in other European standards. On 16 October 2014, the European Court of Justice (ECJ) ruled in favor of the claimant (Case C-100/13).

The present decision primarily refers to only three particular groups of production products: i.e., pipe joints seals made of thermoplastic elastomer, insulating materials made of mineral wool and gates, windows and exterior doors. In principle, however, the decision also involves the fact that EU regulations have priority over national regulations. As a result, the judgment disquieted many manufacturers who serve the supplier industry, also in neighbouring segments of the construction sector.

The relevant authorities in Germany considerably delayed their comment on the case. Only now things are in movement in this issue. On 13 April, the German Institute for Construction Engineering (Deutsches Institut für Bautechnik, DIBt) commented on the court ruling: In the three specific instances faulted by the EU, the DIBt rendered invalid the regulations of the German Construction Rules. The committees of the German Conference of Construction Ministers are now deliberating “… what the consequences of this judgment may be for German Construction Products law.” As a result, this process could soon provide greater clarity for all market participants.↓

*Ü is a letter of the German alphabet. Originally it was spelled UE. Ü is also the the name of a mark attesting to      compliance of a product with German construction regulation.
This article appeared in 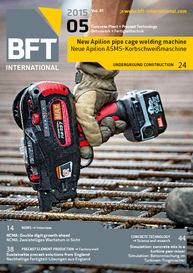 Issue 2018-02 Changes for pipes and manholes

Implications of the ECJ judgment

The judgment that the European Court of Justice (ECJ) issued against Germany on 16 October 2014 will change German construction legislation. To implement the ECJ judgment, the Building Codes of the...

Next year, the BetonTage in the German city of Ulm will take place already for the sixtieth time. The reputation and status enjoyed by this leading German and European event is in good part due to the...

A judgment delivered by the European Court of Justice (ECJ) entails a profound change for Germany in the approval of construction products bearing the CE marking: In an ECJ judgment against Germany...

Judgment C-100/13 delivered by the European Court of Justice on October 16, 2014 required the German building code legislation to be completely redesigned in order to conform to the EU Construction...

New technical assessment rules in consequence of the ECJ judgment

In October 2014, the European Court of Justice (ECJ) considered that the Federal Republic of Germany violated the obligations arising from Directive 89/106/EEC. Large parts of Part B of the...