Precast piles can be manufactured efficiently and to a high quality standard either on a pallet circulation system or on a stationary production line. The production process is basically the same in either of these cases; it relies upon the wide range of available Weckenmann formwork and equipment options.

Driven piles help build solid foundations under adverse soil conditions. For this purpose, they are driven into the ground using heavy machinery until a structurally stable rock stratum has been reached. These piles act as foundation supports for buildings on non-load-bearing soil.

Until the end of the 19th century, pointed wooden piles or tree trunks were used for this purpose and driven into the ground. Although wooden piles are very stable and long-lasting, they begin to rot if they are not permanently immersed in water. The city of Venice is considered to be the largest agglomeration of buildings resting on pile foundations. Over several centuries, the entire city was built on hundreds of thousands of trunks. Another prime example are the old warehouses in the “Speicherstadt” of Hamburg, which are also supported on wooden piles.

Worldwide use of precast piles

Nowadays, the main designs used on a worldwide scale are precast driven piles with a square cross-section made from reinforced or prestressed concrete. Their uses are exceedingly wide-ranging, including simple workshop buildings, commercial and residential developments, and wind turbines.

These piles are either reinforced in the conventional way or prestressed. If they are produced in forms (as described in this article) rather than in a slip-forming or extrusion proc-ess, the reinforcement can be perfectly adjusted to the varying load specifications at the head and tip of the pile. Piles are fitted with internal and external spiral reinforcement to take up transverse tensile forces created by the driving process. The pile head is flat whereas its base is pointed.

Pile production facilities are of major importance in many countries. In the recent past, Weckenmann Anlagentechnik GmbH & Co. KG, too, has successfully completed several related production line projects with varying specifications, as demonstrated by the example of the successful modernization of a production line in Russia outlined in this article.

In 2013, the company TDSK based in Tomsk, one of the largest construction businesses in Russia, joined forces with Weckenmann Anlagentechnik GmbH & Co. KG to upgrade its production line for large precast elements. Due to the positive experience gained in this project, the company went on to enlist the support of Weckenmann experts to also modernize the pile production line at its main manufacturing facility.

“The positive experience we made during the upgrade in 2013 made it clear to us that we would choose Weckenmann again to overhaul and modernize the pile production line as well,” says Alexander Karlovich Shpeter, general manager of TDSK Tomsk. This project started in summer 2014; the upgraded production line was put back into service in February 2015.

Standard piles are 6 to 18 m long and have a 300 × 300 mm cross-section. The new, 72 m long pile form supplied by Weckenmann enables TDSK Tomsk to simultaneously produce piles in the required lengths in 28 adjacent forms, which is equivalent to a total pile length of more than 2 km per day.

The new equipment also includes a concrete spreader and a bucket conveyor with a capacity of 2 m³ of concrete. The distribution hopper is equipped with a spreading auger and makes it possible to fill seven forms at the same time in a quick and easy process. It also features a scraper beam and vibrators, which ensure a uniform surface on all pile sides. The internal vibrators can be lowered; they help achieve a perfect concrete compaction result.

Weckenmann developed a tracking controller for the bucket conveyor. This system fetches the concrete automatically from the mixing plant as soon as it has been requested by the operator. Bucket conveyor and concrete spreader communicate with each other so that concrete can be passed on at any time.

The Weckenmann team of experts have also designed the new bulkhead to produce the typical pile tips. This setup enables the production of both flat and pointed tips for extension piles. The bulkhead can be opened completely to lift out the finished piles vertically. This arrangement reduces the accident risk posed to employees whilst preventing damage to finished products. The fact that three piles can be removed simultaneously also saves time. Also, bulkheads are easy to clean because of their smooth surfaces and cover plates. Forms are also equipped with a hot-air heating system to speed up the pile curing process. The complete form is covered with a tarpaulin to limit the heat loss.

3 employees for 180 m³ of concrete per shift

Just three employees operate the production line in a single shift. It is designed to produce up to 180 m³ of concrete per shift.

This setup ensures perfect product quality in terms of dimensional accuracy and surfaces, an exceedingly high productivity with up to 60 m³ of concrete per employee, and the production of conventionally reinforced but also prestressed piles in one and the same form (provided prestressing equipment is retrofitted) whilst keeping the invested amount to a reasonable limit.

TDSK Tomsk uses its piles predominantly for its residential developments that involve the construction of multi-story buildings around the Siberian city of Tomsk.

Instead of producing only flat precast elements, an intelligently designed circulation system is suitable for a much wider product range, including piles, smaller columns, longitudinal beams and stairs, which is why the installed equipment will pay off much more quickly. 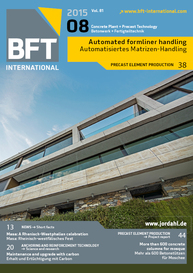 Retaining wall comprising precast piles and pile for such a wall

The TDSK Holding Group is a Russian group of companies specialized in house building in Russia. With its 21 companies and a total of 3,700 employees, the group is able to implement projects of any...