Vollert Commercial Limited situated in Beijing has been supporting sales and distribution of Vollert plants and machinery on the Chinese market since July 2012. The company based in the German city of Weinsberg gladly announced this in a current press release. Yongjuan Cai was appointed as the CEO of this subsidiary.

„Providing a local point of contact, we do not only attend to our customers in China as far as intra logistics concepts for metals and heavy loads are concerned but also regarding all other business segments of Vollert,“ Cai states. At the trade fair bauma China held in Shanghai at the end of November, Cai presented, among other things, also the plants for the production of precast concrete components at the booth of Vollert. 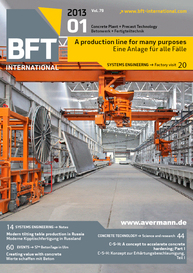 C&G Pigment, a leading marketing company for inorganic pigments, has registered a subsidiary in Leverkusen, Germany. The company establishes a European presence to market its product portfolio from...

C&G Pigment, a leading marketing company for inorganic pigments, has registered a subsidiary in Leverkusen, Germany. The company establishes a European presence to market its product portfolio from...

Liebherr Group at the Bauma China 2014

At Bauma China 2014, the Liebherr Group showcases the latest technologies and developments in the construction machinery and components segments from November 25-28, 2014. At the International Trade...