Tom Schmidt, Director of Pipe and Precast retired from Besser Company on 30 June 2014. Schmidt’s career began in the Finance Department of Besser (Quinn Machinery and Foundry) in April 1992, he became Treasurer in 2005. He was promoted to Director of the entire Pipe and Precast business in 2010.

Besser Company is very pleased to announce Ryan Suszek as new Director of Pipe and Precast. Suszek’s career with Besser started in 2005 as a Financial Analyst. He was promoted to Controller of the Pipe and Precast unit shortly thereafter. He has a Bachelor‘s of Business Administration degree from Northwood University and is currently working towards his MBA. 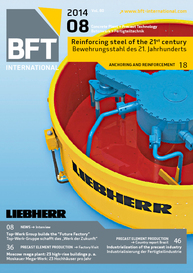 Tom Howell has rejoined the Besser Pipe & Precast Sales Team. He jumped back into his role as sales representative for pipe and precast in October. Producers will remember the excellent customer...

New Products at the Precast Show

Besser Company announces the addition of Travis Dye to the Pipe and Precast Sales Team. Based in Sioux City, Iowa, Travis joins an outstanding sales team that serves producers from around the globe...

Andy Dix, managing director of Charcon Construction Solutions Ltd., has been elected President of the British Precast Concrete Federation, the trade body for concrete products in the UK. He takes over...