This new multifunction hall is the heart of the sports complex in the Swiss municipality of Oensingen. It consists of a cuboidal building of around 17,500 m³, which extends to a depth of up to 3.5 m below the ground. The walls below ground are made of normal-weight concrete and are provided with exterior insulation; the floor was implemented as a steel girder construction. The remaining part of the building was executed in light-colored architectural ­Liapor lightweight concrete which, in Swiss-German linguistic usage, is also known as insulation concrete or insulated concrete.

“The intentionally archaic, massive, and robust character of the building is based on a clearly structured ground plan, reduction of materials, and massive structural design with insulating concrete. Its materiality and quality of execution characterize and significantly influence the optical appearance of the building,” explains Verena Hellweg, the responsible architect at ffbk Architekten AG, which, together with the consulting engineers BSB+Partner from Oensingen assumed planning and execution of the project.

As compact as the construction of the building in its entirety appears, as multifaceted are the details of the building shell. “Window reveals that taper toward the glazing create a façade relief that accords agreeable rhythm to the long and flat building volume. This concept is partly implemented by the setback entrance that is in this way especially emphasized”, explains Verena Hellweg. The requirements placed on the lightweight concrete were correspondingly high. “It was important here to develop Liapor lightweight concrete with low shrinkage behavior to ensure shrinkage-free execution of the façade over the entire length of the building. In addition, the lightweight concrete was required to be of suitable strength to ensure reliable load transmission of the steel girder floor slab construction.

These stipulations were optimally met with the Liapor lightweight concrete used”, declared Daniel Meyer of Liapor Schweiz. The concrete used was LC8/9, consisting of Liaver 1-4, Liapor F3, cement, fly ash, plasticizer, and air-entraining agents. The lightweight concrete was produced by the company Kies- und Betonwerk K. & U. Hofstetter in Hindelbank, Switzerland, which had also developed the suitable mix design for the Liapor. The construction work was executed by Marti AG in Solothurn Switzerland; sample walls had been constructed prior to implementation.

The building shell with its 60‑cm exterior walls greatly con­tributes to the building’s high energy efficiency.

With thermal conductivity of λ = 0.27 W/(m·K), Liapor lightweight concrete provides maximum thermal insulation and, in addition, stores heat. This minimizes total energy consumption of the multifunction hall to the extent that the building satisfies even the stringent Swiss Minergie standard. The massive, monolithic construction, moreover, ensures the necessary robustness of the surfaces without additional insulation, both inside and outside the hall. And, not least, the low-maintenance light gray architectural concrete surfaces fit well into the silvery-gray metal-clad row of buildings in the surrounding area. 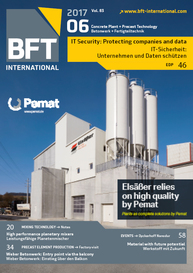 The White Villa in Berlins Westend consciously draws upon typical stylistic elements of the Bauhaus period and transposes them into a modern contemporary ambience. The building shell of Klimapor...