Rolf Ovesiek, long-time Managing Director at Masa GmbH, will go into retirement on December 31, 2018. His professional biography is closely linked to Masa. After leaving school, Ovesiek began his technical training at Henke Maschinenfabrik GmbH (later Masa) in Porta Westfalica. He then studied mechanical engineering at the Lemgo University of Applied Sciences. In 1986, he graduated with a degree in engineering.

In 2000, he took over the management position at the top executive level of Masa-Henke Maschinenfabrik and was in charge of the company’s locations in Porta Westfalica and Dorsten, and of the Masa subsidiary in Moscow. From 2008, Ovesiek was also a member of the Board of Masa AG and therefore in charge of marketing, product development and production in the aerated concrete, sand-lime block and concrete slab divisions. 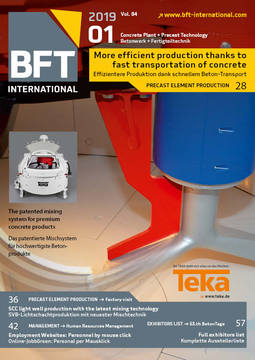 On February 26, 2020, the managing director and shareholder of Paul Maschinenfabrik GmbH & Co. KG (Dürmentingen/Germany), Werner Paul died unexpectedly at the age of 67. Werner Paul, the grandson of...