Masa’s long-time partner in the UK and Ireland, Michael C. Heaton, says goodbye to the active professional life after 44 years in the building materials industry.

Heaton’s impressive career began at the end of 1969, initially as an employee at Masa GmbH – then still Henke Maschinenfabrik GmbH. After only ten years, Heaton became self-employed and founded his own company named Beton Machinery Sales Limited. This did not mean the end of the cooperation between Heaton and Masa. It was the beginning of a long-term partnership that continued up to the present day. 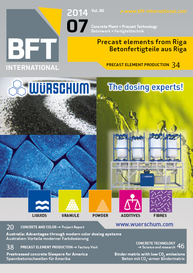 Masa GmbH headquartered in the German city of Andernach has opened an overseas subsidiary for manufacturing small machinery and providing customer service and spare part services in Bangalore in...

It all started in early summer 2012, when the initial technical and commercial discussions took place in the city of Gaziantep in Turkey. Just two months later the cooperation was sealed having a...

In 2012, the South Korean company Decopave Co., Ltd. entered the Asian market as an absolute newcomer to concrete block production. In 2018, the paving stone manufacturer had already fought its way...