In Seoul, henceforth, manufacturers of paving blocks and paver laying companies involved in paved areas longer than 1 km are obliged to mark them with an information sign. This sign must indicate name and address of the company. The citizens of Seoul can notify the Metropolitan Government by sending text messages and photos with the aid of an App specifically developed for this purpose to be used on mobile phones and tablets, if they consider paving blocks to be poorly laid or if paved areas are damaged. The South-Korean capital city will follow this most unique way from now on in order to maintain the high quality of the paved sidewalks in the city center, as explained by a representative of the administration in his opening speech to the 12th International Conference on Concrete Block Pavement (ICCBP).

This and many other ideas and developments relating to concrete block pavement were discussed by about 270 participants of the conference who attended the four days of the event held at the Korean Chamber of Commerce and Industry. In addition, there were about 189 representatives of the administration, according to figures stated by the organizer, the Korean Block Association; and they likewise attended the conference as well as the accompanying exhibition of the supply industry.

From slip resistance to innovations

A very interesting lecture was given by a British scientist on the use of building roofs as planted rest and leisure areas for citizens. According to him, the combination of permeable interlocking pavements and planting of roofs could be part of the answer to floods caused by the more frequently occurring events of heavy rainfall.

A Korean scientist began his lecture with an overview of proj-ects integrating solar modules in roads and bicycle paths with mentioning projects of Solarroad or Wattway, for example. In the scientist’s opinion there is a lot of potential in this kind of application and his university is developing an own module at present.

The next ICCBP expected in 2021

Companies and organizations presented at 54 booths, installed outside the conference room and in an adjacent room, their products and services for the companies involved in manufacturing and laying of concrete products as well as the local authorities. Among the companies represented at the accompanying exhibition were Quadra, Topwerk, Finke Dosiertechnik, Pemat, Rotho, Masa, Techmatik, mbk, Seoho Eco Top, Samjung and Wasa, for example. The number of visitors could have been much higher according to the unanimous assessment of the exhibitors; though, in their opinion, the high registration fees determined by the Korean Block Association had avoided a higher level of participation. The quality of the visitors, on contrary, was very good, according to them.

The exhibitors had moreover the opportunity to showcase their companies, products and services on a stage in the conference room, using short PowerPoint presentations.

The next ICCBP is scheduled for the year 2021. However, it is still unclear, where it will take place. 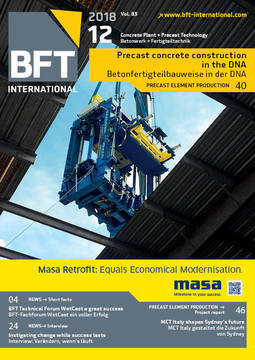 Three years have already passed since the last "International Conference on Concrete Block Pavement  ICCBP) took place in the German city of Dresden with great success. This also means that the...

Three years have already passed since the last  International Conference on Concrete Block Pavement (ICCBP) took place in the German city of Dresden with great success. This also means that the next...

ICCBP 2018 (The 12th International Conference on Concrete Block Pavement) will take place from 16 to 19 October 2018 in Seoul, Korea. The conference is the continuation of a series of 11 of successful...

From 9 to 11 September 2015, Dresden was the center of the professional world for the concrete block pavement industry. The 11th International Conference on Block Pavement, ICCBP 2015, was held at...