The new InterCityHotel Hannover Ost, scheduled for completion at the beginning of 2020, will be an eye-catcher at Andreas-Hermes-Platz: a 15-storey high-rise with a pentagonal ground plan. This is also the case with the new IntercityHotel: the reception area and bar are located on the ground floor, the hotel restaurant on the first floor and conference rooms on the second floor.

„It is only from the 4th floor onwards that there are only hotel rooms and the floor plans of the floors remain the same,“ explains Dipl.-Ing. Kai-Uwe Oberdieck of LSM Ingenieure für Tragwerksplanung from Hanover, who is responsible for the project in the state capital of Lower Saxony. „This means that in many places on the 13th floor, for example, where supports could be installed, they would interfere with the lower floors - for example in the bar and restaurant area, which should remain completely free of supports.

For this reason, no inner reinforced concrete columns were used at all. The reinforced concrete slabs were stretched from the load-bearing outer wall to the inner core, so that single-span slabs with a span of around 8.0 m were created. With the conventional reinforced concrete construction method, however, a slab thickness of at least 32 cm would have been necessary due to the deformation, which adds up to a heavy weight load for the foundation with 15 upper storeys.

Material and weight savings due to hollow ceiling

After the use of lightweight concrete had been rejected due to various reasons, those responsible became aware of Cobiax‘s patented, environmentally friendly hollow core technology in the course of their research. In comparison to solid reinforced concrete, it enables ceilings to be up to 35 percent lighter: The core element of this system consists of hollow cores of recycled plastic weighing only about 400 g, which replace up to 35 percent of the solid concrete inside a reinforced concrete ceiling - where no concrete is required for (bending) load-bearing capacity. „This not only saves material and weight, but also makes thinner building ceilings and significantly larger spans of up to 20 m possible,“ explains Dipl.-Ing. Volkmar Wanninger, CEO at Heinze Cobiax Deutschland GmbH.

„In addition, the lower volume of concrete also reduces emissions of environmentally toxic pollutants. CO2, for example, can be reduced by up to 20 percent. „Due to the lower ceiling weight and the large displacement volume of up to 35 percent, Cobiax hollow slabs not only reduce the load in the ceilings but also optimize the foundation. For us, this was the factor that contributed significantly to the decision in favour of this solution for the InterCityHotel project,“ emphasises Oberdieck.

The patented Cobiax system consists of 250 cm long linear fixing elements made of rebar steel, in which the hollow cores are integrated. „The modules mounted between the upper and lower reinforcement systems are available in Eco-Line and Slim-Line versions. The latter are designed for ceiling thicknesses of 20-45 cm and will be used for the project in Hanover,“ says Wanninger. The hollow core and the remaining solid areas are taken from a layout plan, which was prepared by Cobiax taking into account the ceiling statics of the structural engineer. Concreting in the hollow core area is carried out in two layers, thus enabling the hollow cores to be installed in the concrete slab without buoyancy.

A total of 5,476 Cobiax hollow core modules will be used from the ground floor to the 15th floor of the IntercityHotel, resulting in a total concrete saving of 403 m³ and a CO2 reduction of approximately 85 t. In addition to the weight saving due to less concrete, slab thickness could be reduced from 32 to 30 cm, as the hollow cores already allow the desired span widths with this dimension. „The load reduction caused by these two factors extended over 15 storeys down to the foundation and totalled around 15,000 kN,“ explains Oberdieck. „This way we could save about 10 of the 18 m long drilled piles.“

Shell construction completed up to the 3rd upper floor

The hollow ceiling system of the Wiesbaden-based company was also able to impress the project managers with further properties: „For example, it was important to us that we could use dowels to fasten something, and that many breakthroughs in particular were easy to carry out,“ explains Oberdieck. Component temperature control can also be easily combined with Cobiax technology.

The project managers were very satisfied with the hollow slab system: „In addition to the ease of handling, it was essential for us to reduce the overall height and to achieve a weight saving of 20 percent for the foundation and the support beams,“ explains Oberdieck. „The load application points at the corners and at the core were also relieved. All this has had a positive effect on the punching shear checks.“ 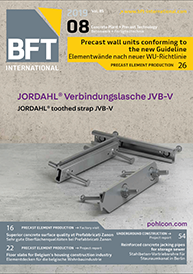 Peikko has received German national technical approval from DIBt for its DELTABEAM® Composite Beams to be used with hollow-core slabs in situations of fire. The Deutsches Institut für Bautechnik...