Zech Group SE is a strategic management holding company serving as the umbrella organization for three divisions with their operating entities. This parent company coordinates the activities of the three divisions, develops the overarching strategy, and defines the global targets and objectives for continuously developing the entire group of companies. Zech Group is a medium-sized, family-owned and managed company whose wide range of services make it an experienced partner in the building, real estate and hotel segments. This broadly diversified group of companies focuses on the entire value chain in the real estate industry.

BWE-Bau produces a wide range of extensive precast elements, including solid walls and sophisticated sandwich façade panels as well as elaborate custom elements. The company primarily serves the residential segment, but the dimensions of the pallets used in the production process also allow for the manufacture of large-scale wall units for industrial premises.

From a design perspective, it soon became clear that a state-of-the-art pallet carousel plant should be chosen as the new production line. BWE-Bau reviewed and assessed the range of carousel plants available on the market and finally opted for a highly flexible design with a central transportation system.

More specifically, Haarup’s scope of supply included a 15 m³ aggregate feed bin with hydraulic cover, a 50 m inclined conveyor with a throughput of 155 m³/h, 10 assembled aggregate bins (each providing a capacity of 60 tons and two replaceable day bins), as well as a distribution conveyor for these 10 aggregate bins. In addition, the equipment manufacturer delivered 12 batching conveyors, one weighing conveyor, four powder bins, each with a capacity of 60 tons, complete with the associated screws and cement weighers, and a 750 l and 1,500 l mixer providing a total throughput of about 34 m³ of concrete per hour. Moreover, the Haarup mixing unit comprises two four-chamber additive weighers, two pigment scales, two weighers for reused water, two bucket lines for conveying concrete to the Avermann spreader, 110 m of bucket conveyor tracks, and the complete MIXO 5000 control unit, as well as the complete assembly/commissioning process.

During the on-site interview with BFT editorial staff, the BWE-Bau plant manager, Dipl.-Ing. (FH) Wolfgang Ehrenberg, was very happy with the entire collaboration process as well as the outcome: “Right at the outset, during the first visit of the premises, we got a first impression of how the new production facility could look like. The extraordinary height of the building, for example, would allow us to install a curing rack in the course of the next plant extension, which also makes it possible to increase the number of tables. Today, I should say that this plant design is unique in Germany as it links utmost flexibility in the manufacture of custom façade panels with cost-effective cycles and process controls. We want to stand out from the bulk concrete market by setting a new standard with top-class products. To adhere to this high quality standard, our concrete is compacted on a unit that combines shaking with vibration. Last but not least, I am very pleased with the outstanding collaboration of all parties involved in this project.” 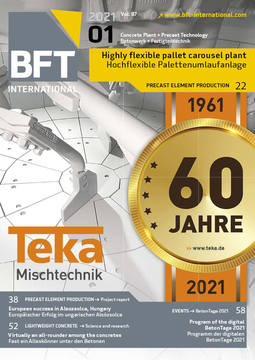 In 2019, BWE Bau Fertigteiltechnik GmbH, a company of the Zech Group, relocated its Wiefelstede production facility to Lemwerder. BWE Bau is manufacturing quite different two-dimensional precast...

When the Teknologisk Institute in Denmark decided to install a state-of-the-art concrete laboratory, Haarup Maskinfabrik A/S was chosen to supply a concrete batching and mixing plant. The plant was to...

Touchscreens in a rough production environment

Pallet rotation is the logistic backbone of a precast plant. It transports the pallets (frequently also referred to as tables) from one workstation to the next. Longitudinal transport typically takes...